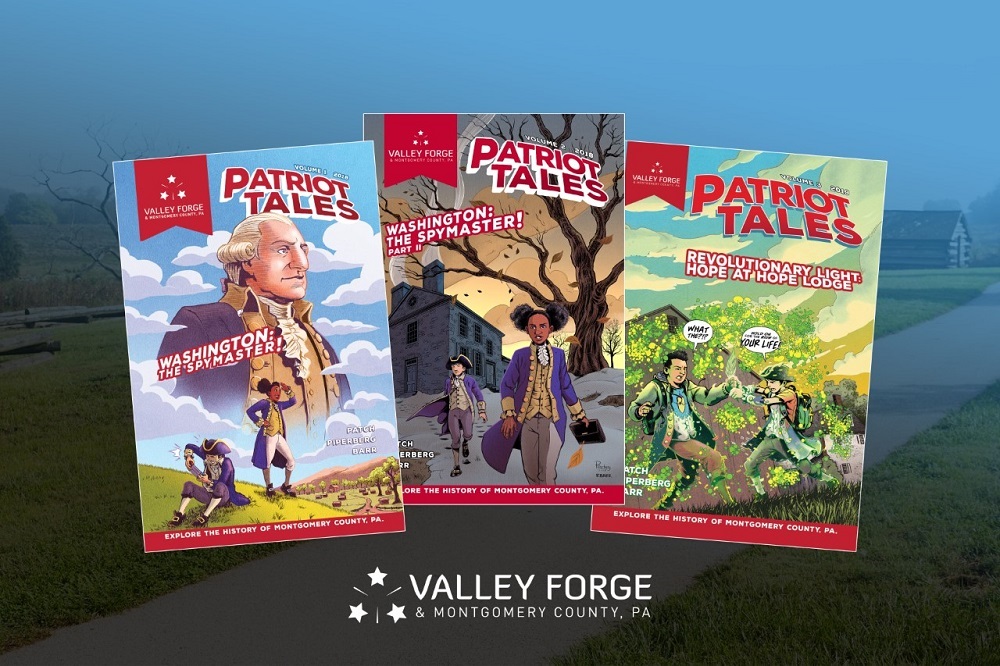 Copies of Patriot Tales will be handed out in the temporary visitor center in the main parking lot where people can also explore the Encampment Store. (Image courtesy VFTCB)

Besides Montgomery County Independence Day festivities like fireworks and parades, the Valley Forge Tourism & Convention Board will be commemorating this Fourth of July in Montco with a third issue of its award-winning comic book, Patriot Tales. And, this edition comes with a special anti-bullying message for kids.

Free copies will be handed out at the Valley Forge National Historical Park on July 4, and the comic book will also be distributed down at the Wawa Welcome America event in Philadelphia.

The series highlights the park’s history, and the VFTCB’s history brand, Patriot Trails, with fictional stories of children traveling back in time to meet George Washington and embark on an exciting adventure to discover the area’s rich history.

“This comic books makes history more family-friendly, and adds to the overall experience in Montco,” said Edward Harris, Chief Marketing Officer of the VFTCB. “We’re so proud that kids are learning about the history here, but we also wanted to include a positive, anti-bullying message in this latest issue to connect with children on another level.”

The comic book also includes a section of puzzles to educate kids on historical facts, and features the Montgomery County mascot, Monty the Fox. It’s being distributed to community libraries, elementary schools, historic sites, 75 hotels, and at the VFTCB’s traveling kiosk during popular events throughout the year. A digital version can be downloaded at PatriotTrails.com.

At the park, the comic book will be handed out in the temporary visitor center in the main parking lot where people can also find out about visitor services, explore the Encampment Store, the VFTCB information desk, take public tours, and watch the park orientation film while work continues on the $12 million renovation project to the current visitor center.

This year’s VFTCB summer TV campaign was also inspired by the comic book. The commercial brings the story to life featuring two kids and two soldiers exploring the history and unique attractions across Montgomery County. Some of the popular attractions featured in the commercial include indoor skydiving at iFly, zip-lining at the Elmwood Park Zoo, 5 Wits and Legoland.

The VFTCB partnered with the Philly-based production company, Fresh Fly – who also worked on the organization’s Embark Montco and Montco Makers initiatives – as well as well-known director and producer John Rusk to assist with scenes shot at Valley Forge National Historical Park. Rusk has worked on a number of famous films, including M. Night Shyamalan favorites, like the “The Sixth Sense,” “Signs,” and most recently, “Glass.” Rusk is also known for his work on “A League of Their Own,” “The Pelican Brief,” and “Dead Poet’s Society.”

There are sixty, thirty, and fifteen-second versions of the spot, which are airing throughout the summer in Philly, Washington, D.C., and the Harrisburg, York, Lancaster, and Lebanon markets, as well as on digital platforms and social media. For more information on Fourth of July events in Montgomery County, check out https://www.valleyforge.org/events/july-4th-fireworks/.