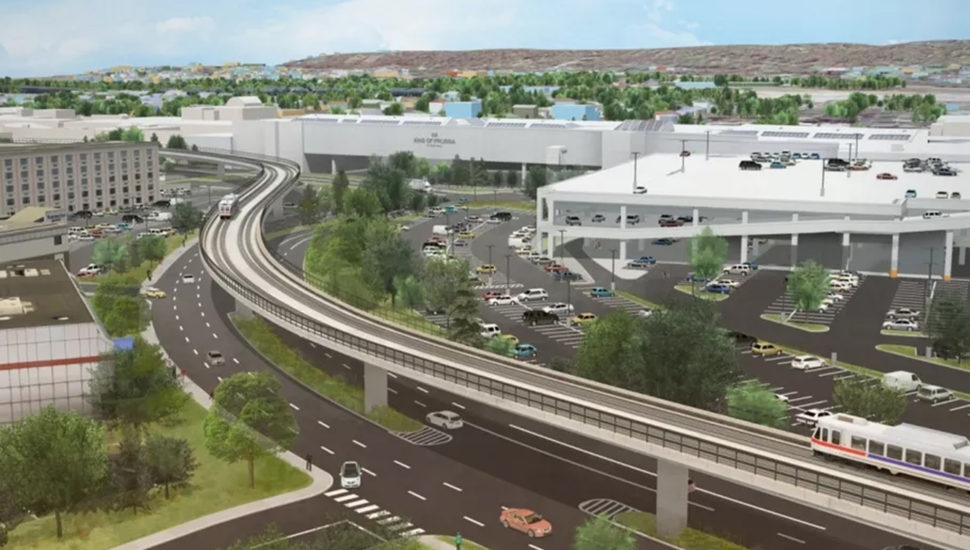 The King of Prussia Rail (KOP Rail) Project has reached two milestones within the month. The Southeastern Pennsylvania Transportation Authority (SEPTA) Board has approved a contract to advance further engineering of the KOP Rail extension of the Norristown High Speed Line, (NHSL). The selected consultant team is led by HNTB, an infrastructure solutions firm serving public and private owners and contractors.

The contract scope encompasses the detailed preliminary design work, including surveying and utility and geotechnical investigations. This will progress the engineering and architectural design from the conceptual Locally Preferred Alternative (LPA), completing 15 percent of the total design. This design work is able to progress and is fully funded with existing federal funds already allocated to the project.

Additionally, the Delaware Valley Regional Planning Commission (DVRPC) released a new study earlier this month that explores the local land use and transportation implications of the proposed extension of SEPTA’s NHSL to the King of Prussia area. The report, Station Area Planning of the Norristown High Speed Line Extension to King of Prussia, supports the KOP Rail Project extension by exploring concepts related to pedestrian and bicycle access to the five proposed stations, as well as transit-supportive land use and development considerations for the area.

“It is great to see the project moving forward,” says Jerry Sweeney, President, CEO and Trustee of Brandywine Realty Trust, and Chairman of the KOP Rail Coalition Advisory Committee. “KOP Rail promotes and strengthens regional growth, and is needed to connect the three largest employment centers in the region– King of Prussia, University City and Center City. I am excited to see where this project takes us.”

About the King of Prussia Rail Project:
King of Prussia Rail is a proposed 4.5-mile extension of SEPTA’s existing NHSL. Currently, the NHSL provides service between the 69th Street Transportation Center and the Norristown Transportation Center, serving the Main Line area in Delaware and Montgomery Counties and Center City Philadelphia. The extension has five planned stations in King of Prussia, all of which will be compliant with the Americans with Disabilities Act.

About The King of Prussia Rail Coalition:
The King of Prussia Rail Coalition (Coalition) seeks to garner regional support for the proposed extension of the existing Norristown High Speed Line into King of Prussia. The Coalition is represented by a diverse group from throughout the Philadelphia region and includes commercial property owners, elected officials, residents, employees, visitors, economic development and job growth agencies, chambers of commerce and more. To date, over 720 people and companies have endorsed the project on the Coalition’s website, koprailcoalition.com.