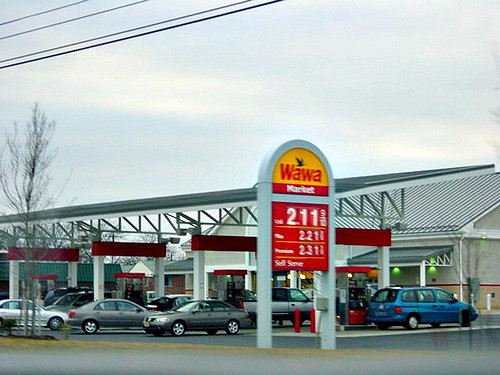 Despite their convenience and profitability, many suburban residents oppose the construction of "Super Wawas" in their neighborhoods. (Photo courtesy of flickr.com.)

Supersized Wawas, offering gasoline in addition to sandwiches, snacks and country-fresh milk, have proven hugely successful in the Philadelphia suburbs, but many residents are unhappy having one move into their neighborhood.

A Wawa store with gasoline pumps is planned for Wayne, and neighbors are already pushing back, writes Erin McCarthy at philly.com.

One battle over a “Super Wawa” proposed for Fayette Street in Conshohockenn has  been going on since 2010.  Other fights have erupted over plans in Voorhees, Doylestown, Hatboro, Abington, Upper Gwynedd, and Brick, N.J.

The convenience chain giant continues to expand, however.  Wawa operates more than 800 stores in six states and Washington, D.C. — and almost 600 of which have gas pumps.