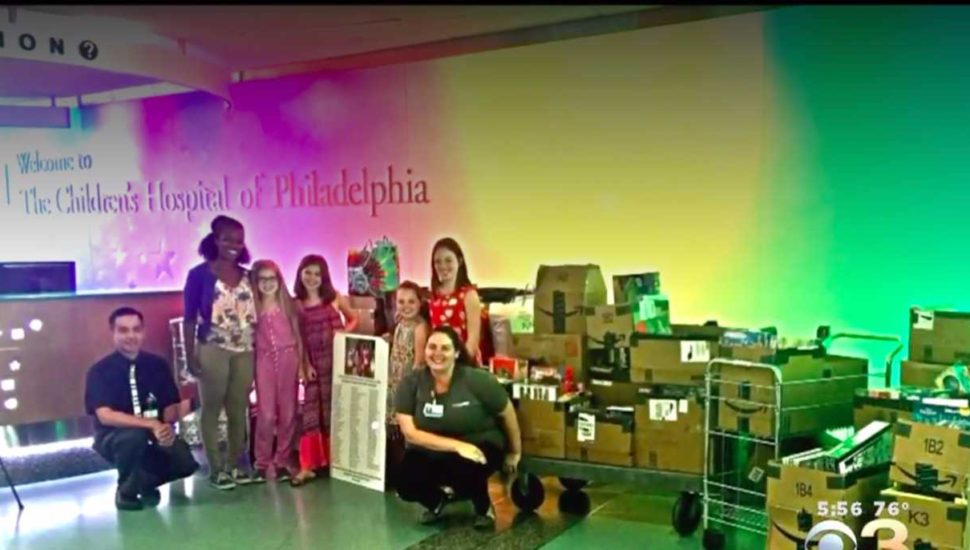 For the second year in a row, thirteen-year-old Sophia Giamo from Blue Bell is helping run a toy collection drive for children being treated at CHOP. (Image via CBS Philly)

Thirteen-year-old Sophia Giamo from Blue Bell is continuing her mission to make sure that every child at the Children’s Hospital Of Philadelphia has toys to play with while they are undergoing treatment, writes Jessica Dean for CBS Philly.

Giamo realized the importance of toys after a stay in hospital three years ago for a nasty flu.

“I had to get surgery and they had to put a tube through my back into the lung,” said Sophia.

But it was the toys from the Child Life specialists at CHOP that helped her through the entire ordeal.

When Sophia’s mother met with a friend whose daughter, eleven-year-old Bronwyn Hansen, was also a patient at CHOP, they came up with the idea for ‘CHOP DROP.’

Now after the success of last year, the girls are doing it again through their nonprofit Bronwyn’s and Sophia’s CHOP DROP.

CHOP DROP will be collecting toys through social media until the middle of August and will then drop them off at the hospital.

Read more about the toy drive at CBS Philly by clicking here.

HealthcareBlood Drive: Give Blood This Week at MCCC's Pottstown or Blue Bell CampusJanuary 19, 2021