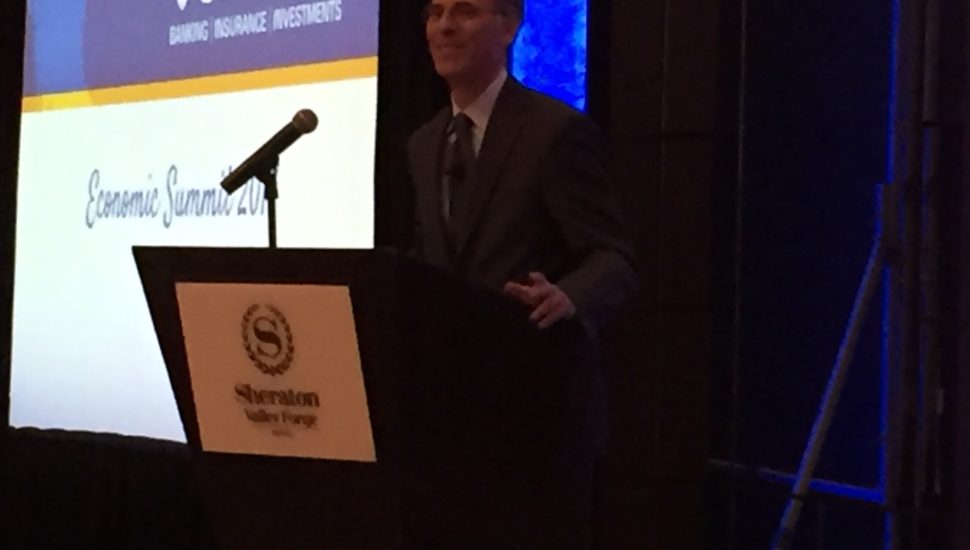 Dr. Mark Zandi, the chief economist of Moody’s Analytics, shared his insight with those in attendance at Univest Bank’s annual Economic Summit.

The esteemed panelists struck an optimistic tone at Univest Bank’s annual Economic Summit, held in early May at the Sheraton Valley Forge Hotel in King of Prussia.

All were all confident about the future of America’s economy, particularly Zandi.

“My task is to consider the health of the economy, and for me, the most important thing I use to judge that is jobs,” said Zandi. “Through that prism, we’re doing really well. We created 2.5 million jobs last year and 2.5 million the year before that. In fact, we’re in the midst of the longest period of consecutive monthly job growth in economic history.

Zandi acknowledged how people have questioned the quality of the jobs created.

“The only part of the economy that hasn’t really created jobs is the energy sector.”

Zandi offered up what he believes to be the single best statistic to gauge how the economy is performing in real time.

Zandi also shared what he thinks will be the challenges that lie ahead.

“Our biggest problem for the foreseeable future will be finding and holding onto skilled workers,” he said. “That’ll be the biggest constraint on economic growth.”

Mike Keim, president of Univest Bank and Trust Co. and moderator of the panel, took some time at the beginning of the presentation to update guests on the progress his bank has made in the last two years.

“We’ve had two acquisitions and a lift out,” he said. “We acquired (Mount Airy-based) Valley Green Bank in January 2015, and that gave us our first visible presence in the Philadelphia marketplace and added $400 million in assets to our balance sheet.

“Last May, we were able to pick up a 15-person team (in Lancaster County) from BB&T that consists of 14 lending specialists and one retail specialist. Lifting out an entire team that knows the market, that lives in the market, made it easier to for us to enter the market.”

Which it did by opening a branch in West Lampeter Township, as well as a regional office in the Greenfield Corporate Center.

“The Lancaster market has been a home run for us, quite frankly,” said Keim.

“In a little over two years, we’ve been busy,” said Keim. “We’ve gone from a $2.2 billion dollar bank to a $4.3 billion dollar bank. What was only a Bucks and Montgomery (County) footprint with our financial centers has now turned into something that stretches from South Philadelphia, to Ocean City, N.J., to the Lehigh Valley, out to Lancaster.”

Thanks for your continued support…

We recently asked you to support our community journal. The response, in a word, is heartening. You have encouraged us in our mission — to provide upbeat, positive Montgomery County business, cultural and community news. Some of you have even followed through and become MONTCO Today Backers, which is especially gratifying.

Although a subscription to MONTCO Today remains free, it takes hundreds of hours to write and post stories, and thousands of dollars to sustain each month.

If you enjoy reading timely, accurate, upbeat Montgomery County stories every day and appreciate the headlines and stories we serve up, please consider becoming a MONTCO Backer with either a recurring monthly amount for 10-cents a day or a one-time amount of your choosing.