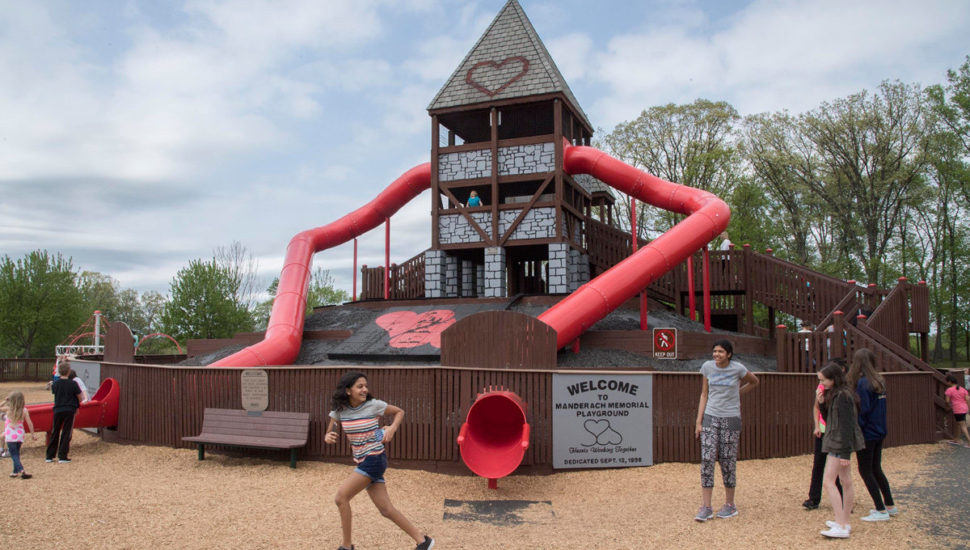 The Manderach Memorial Playground at Limerick Community Park was built by community parents to honor a mother and baby murdered over two decades ago. (Image via Philly.com)

A beautiful playground in Limerick stands in memory of a mother and baby who were victims of a horrific crime over two decades ago, writes Maria Panaritis for Philly.com.

The Manderach Memorial Playground at Limerick Community Park was built by area parents to honor Lisa Manderach and her 19-month-old daughter, Devon. They were murdered in 1997 during a Sunday visit to a children’s clothing store in nearby Collegeville.

“That was the most horrific of horrific crimes that’s ever happened in this area. It shook everyone to the core,” said Township Supervisor, Tom Neafcy Jr.

The tragedy consumed the community for months. Then Ginger Childs, a parent living nearby, approached the township with the idea of letting residents construct a playground on Swamp Road in memory of Lisa and Devon.

After getting the green light for the project, Childs led a volunteer committee that successfully raised $500,000 in cash and in-kind donations. When the project was ready to begin construction in 1998, hundreds of residents showed up with shovels and other tools and spent several weeks completing it.

Now, nearly two decades later, the stunning playground still provides a fun and relaxation environment for people from all over.

Read more about the memorial playground at Philly.com by clicking here.