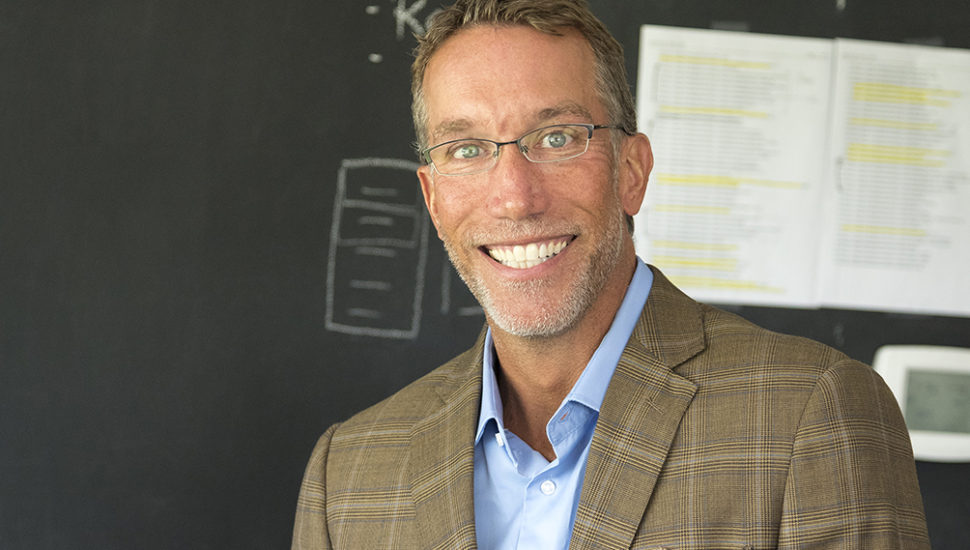 Joe Warner, the founder and CEO of West Chester’s 20/10 Solutions, helps clients with services that include strategy, creativity, and marketing.

In the section of his LinkedIn account, where most other professionals outline their job descriptions with similar, long-winded verbosity, Joe Warner simply states, “I make communications dreams come true.”

It’s not that the 47-year-old founder and CEO of West Chester-based 20/10 Solutions isn’t interested in sharing the specifics of what he does. It’s just that he’d rather people focus on the bigger picture he and his staff are painting.

After all, the full-service agency specializes in strategizing, creating, interacting, marketing, and just about anything else your heart desires.

“A client might come to us and ask us to make them a brochure,” said Warner. “Great. No problem. But I’ll ask them what their goals are, what their distribution plan is. Oftentimes, they won’t know.

“So I like to think we help shine a light on the bigger picture. That way, we can better service them. At the very least, it’s helping them to create a vision.”

Thus the name 20/10. The numbers represent a vision so perfect that studies have shown that well less than one percent of the population has it.

Warner, literally, does not have 20/10 vision, hence the glasses he needs to aid his sight. But one might argue that, given his success in the communications industry, he boasts the business equivalent of it.

Interestingly enough, while the South Park native was a student at the University of Pittsburgh, his mother would’ve told him that his vision was blurred.

“I was an engineering major, and have always been good in math, but I switched my major to studio arts,” he said. “That didn’t go over well with my parents. I was one of seven kids, and there are three or four engineers in the bunch. They thought I was crazy.”

Warner, who lettered in cross-country at Pitt, started his career in 1993 as swiftly as he could run the mile (4:16).

He moved to eastern Pennsylvania and began working at Kingswood Advertising, now Backe Digital Brand Marketing in Radnor. He eventually moved on to the McClafferty Printing Company in Wilmington.

“It was always on the table, starting my own firm,” said Warner, now a married father of three kids, ages 20, 18, and 15. “At Kingswood, I split time designing and working with the tech team. But I didn’t really learn much about printing. So I joined McClafferty as an operations manager to learn the ins and outs of printing.”

By 2000, he had the requisite knowledge and experience to take the plunge.

Warner added a programmer during his second year of business. By the third year, he had another designer, and by the fourth year, he had five people.

The company, originally named 20/10 Design, has since experienced steady growth, and now has 12 employees.

“In 2008, I switched the name to Solutions, because we’re more than just a design shop, much more,” said Warner. “We aim to provide business solutions, grow our clients’ exposure, and increase their revenue, and that encompasses a lot.”

Considering that 20/10 Solutions does not have a sales force, the company’s evolution is a testament to its ability to meet and exceed client demand.

“We don’t have a single employee designated for sales,” Warner said. “All of our work is based on referrals. Our leads are more qualified that way. There’s trust on both sides of the equation.

“And our tenure is pretty strong. If you start working with us, odds are you’re going to continue to work with us. We average eight years of tenure per client.”

Visiting Angels, a nationwide assisted living service with more than 500 franchises in operation, is one of 20/10’s biggest clients. Warner’s staff maintains the website for Visiting Angels. Take a quick peek at it, and you’ll see how 20/10 is ahead of the technological curve.

The company also works with the nonprofit NFL Alumni Association, and in doing so, created the promotional materials for Mike Ditka and Ron Jaworski’s Cigars with the Stars, a fundraiser during Super Bowl week.

Although 20/10 is considered an expert in the tourism and hospitality industry, it caters to a wide variety of clients. It even works on retainer for the Virtua Hospital Foundation in South Jersey.

“Our goal is to increase our local client base,” said Warner. “It would be nice to work more often with the people in our immediate community.”

The two keys to 20/10’s success have been the chemistry among its employees and their ability to adapt to the changes in the industry.

“I think we have great synergy,” said Warner. “We are eclectic folks who get along well.

“I like to think of us as a 16-year startup, and I don’t want that to sound demeaning. With the changes in technology, you really have to be proactive, learn, and stay on top things. Every one of our employees has an allotment of money for classes or seminars that they think will help them sharpen, refine, and learn new skills.”

Retirees All Across the Country Are Moving to These Four Towns, and One Is in Delaware County