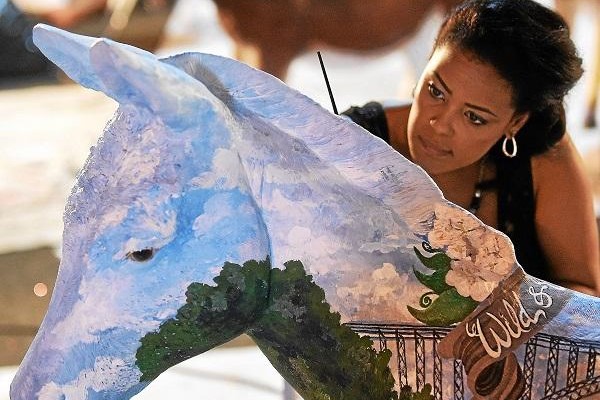 The Philadelphia 2016 Host Committee for the Democratic National Convention is presenting “Donkeys Around Town,” a colorful herd of 57 fiberglass donkeys painted by local artists, writes Linda Stein for the Delaware County News Network.

The idea was the brainchild of former Governor and Philadelphia mayor Ed Rendell, who is the Philadelphia Host Committee Chairman. He explained during the unveiling that the 57 donkeys represent the 50 states, six territories, and Washington D.C.

Local artists were given six days to work on their assigned donkeys at a warehouse on the Delaware River with some of them continuing to paint even through the unveiling. The artwork painted on them was suggested by delegates from each respective area, who then signed off on the artist’s final designs.

Among the artists given the chance to put their touch on the festive donkeys were Ambler’s Lynnette Shelley, Bala Cynwyd’s Jonathan Mandell, and Norristown’s Jeleata Nicole.

Read more about the artists from the Delaware County News Network by clicking here.