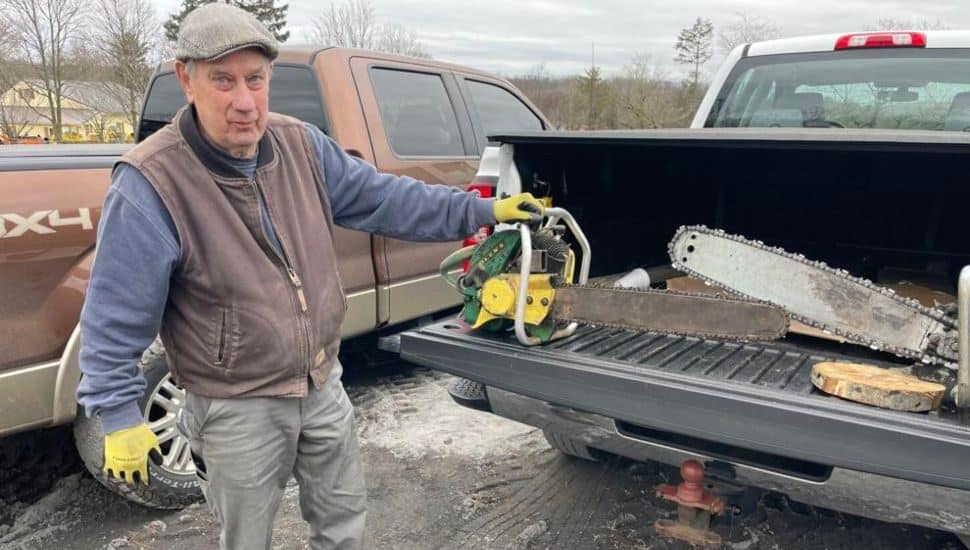 The 2023 Haines Antique Logging Show in Pennsburg, in northwest Montgomery County, drew participants from up and down the East Coast, despite the wet weather. Onsite, they viewed machinery, talked shop, and (primarily) reminisced reported Dan Sullivan in Lancaster Farming.

Attendee Jim Greer of West Chester got into the business at age 15, when his father viewed its rural setting as a chance to keep him from getting into mischief in big city Philadelphia.

He’s now 82. And still remembers the long-ago purchase of his first chainsaw. “I thought it was the greatest thing since sliced bread,” he said.

John Fisher of Macungie recalled a childhood helping his grandfather in the logging business.

“He had a steam-powered sawmill, and he ran the boiler on the scrap.

”So, we’d bring things from the woodlot and … burn it to make steam,” Fisher shared.

The modest debut had “…like six of us,” Price remembered. “And now there’s a thousand of us show up.”

The event also featured a vintage train display. Rescued from storage, it once was a regular attraction displayed publicly in Pennsburg and East Greenville.

Additional coverage of the 2023 Haines Antique Logging Show is at Lancaster Farming.

A large-scale railroad setup, once publicly displayed in two communities in northwestern Montgomery County
before being rescued from storage and displayed in Pennsburg earlier this month.