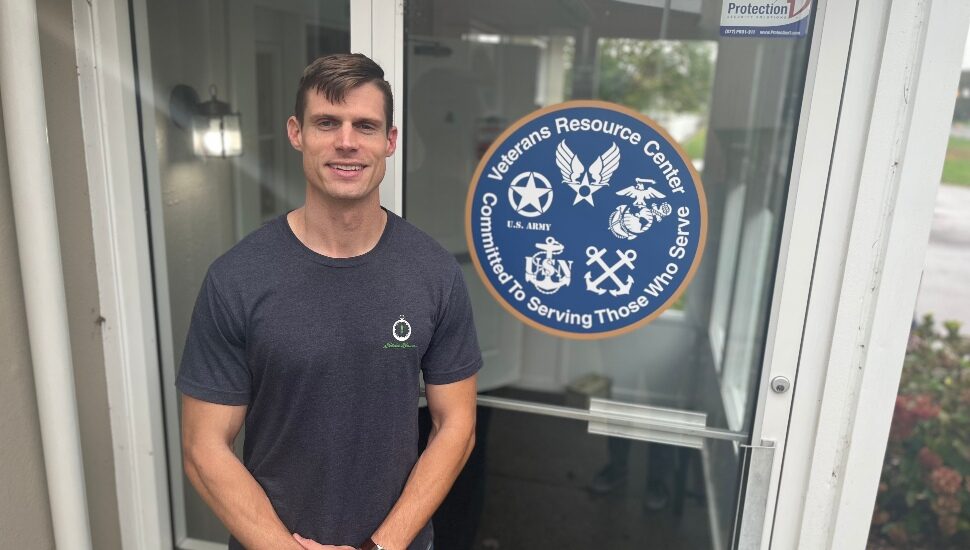 Eleven months ago, Ryan Oakes was an executive officer and second-in-command to a United States Marine Corps Rifle Company of over 200 Marines.

He spent his days at sea, sailing around the world to places like Japan, Jordan, and Djibouti. Before that, he was repairing fighter jets.

However, this Friday, Veterans Day, will be the first in seven years he’s spent as a civilian and student at Montgomery County Community College.

“It’s been great for me to focus just on my own goals for a while. The military has a great sense of we. Transitioning back to civilian life, it’s been more of a sense of me,” he said.

Oakes, 32, who lives in Bryn Mawr, holds a bachelor’s degree in Media Communications but decided after leaving the military he wanted to change his career path to work in healthcare.

He decided to come to Montco to take prerequisite courses toward a nursing degree, with the goal of eventually getting his Bachelor of Science in nursing.

A Sense of Direction

Oakes enlisted in the Marines in the fall of 2014. He was fresh out of college and unsure what he wanted to do with his life. He thought the military could give him a sense of direction his life was missing.

After surviving boot camp on Paris Island, S.C., he trained to become a fixed-wing aircraft airframe mechanic on F-A/18 fighter jets and was stationed at Marine Corps Air Station Miramar in San Diego for two years.

He was then deployed to at Marine Corps Air Station Iwakuni in Japan.

Several months later, he attended Officer Candidate School in Quantico, Va. Upon completion, he was commissioned as an officer before attending The Basic School and Infantry Officer Course. After the conclusion of his training, he was stationed in Camp Pendleton, Calif. and placed in charge of a rifle platoon of 40 Marines.

“Basically, I was in charge of training, and preparing them to go to deployment,” he said. “Teaching them infantry tactics, strategy. It’s one of the hardest things I’ve ever done for sure.”

Six months later, they sailed out on a seven-month voyage around the world as part of a Marine Expeditionary Unit.

“I’m never going to go on a cruise ship ever again,” Oakes quipped. “We stopped in Hawaii, Guam, then 62 days straight at sea, which was unbelievable. Talk about cabin fever.”

Back to Civilian Life

After sailing home, Oakes was promoted to executive officer and was now second-in-command to 200 Marines. After a year and a half of training, they deployed to Okinawa, Japan, before sailing to Australia. The pandemic restricted visitors, meaning Oakes couldn’t get off the ship.

The Marines sailed back to Okinawa, and then onto mainland Japan where Oakes explored eastern Japan. He climbed Mount Fuji and even learned to scuba dive. Yet after seven years in the Marines, his service would soon come to an end.

“I had to make a decision of whether I wanted to stay in or get out and ultimately, I came to the conclusion that that was enough time for me,” he said. “I had some other things I wanted to accomplish. It was absolutely a phenomenal experience, and I would do it again in a heartbeat. I’ve grown so much as a person from those experiences.”

After discharge from the Marines, Oakes decided he wanted to continue helping others by working in medicine. He wants to work in an Emergency Room as a nurse practitioner. He started taking classes at MCCC in May 2022.

“I got straight A’s this summer,” he said. “I took four accelerated classes. It was a whirlwind but it’s going really well. Overall, I enjoy it.”

Attending classes with some students who are 10 years younger than him has been an adjustment, he said.

“I definitely feel like I’m the old man,” he said. “But at the same time, I cherish the role. There are a lot of new perspectives. It doesn’t really matter if I’m 10 years older than you. It is a welcoming environment.”

While some of his classmates might be younger, he said he’s learned as much from them, as they have from him. For example, one student in his biology class this summer was from Vietnam and English was not his first language.

“But he did well in the class,” said Oakes. “It’s impressive. I’m trying to picture myself going to another country and having to learn something as complex as biology in another language. That’s incredible.”

Outside of the classroom, Oakes has found the camaraderie he’s been missing while continuing to demonstrate leadership. He was recently elected to the Student Government Association as a senator. He’s treasurer of the Rotaract Club, which performs community service projects. He regularly attends study groups with his classmates and works in a work-study program at the Veterans Resource Center through the Veterans Administration.

Oakes said one of the things the military has done for him for which he is most grateful is it has given him inner strength, leadership skills, and a sense of discipline he didn’t have when he first enlisted.

This Veterans Day, Oakes hoped people took time to remember the sacrifice that veterans gave for their country.

For more than a half century, Montgomery County Community College has grown with the community to meet the evolving educational needs of Montgomery County. The college’s comprehensive curriculum includes more than 100 associate degree and certificate programs, as well as customized workforce training and certifications. Students enjoy the flexibility of learning at the College’s thriving campuses in Blue Bell and Pottstown, at the Culinary Arts Institute in Lansdale, and online.

As an Achieving the Dream Leader College of Distinction, the institution is positioned at the vanguard of national efforts to remove barriers to access, improve learning outcomes, and increase completion for all students. The College also is recognized regionally and nationally for its sustainability leadership, work with military veterans, community service and service-learning opportunities, and use of classroom technology. For six consecutive years, MCCC has been named one of the Most Promising Places to Work in Community Colleges in the nation by the National Institute for Staff and Organizational Development for its commitment to diversity through inclusive learning and work environments, student and staff recruitment and retention practices, and meaningful community service and engagement opportunities. For more information, visit https://www.mc3.edu.