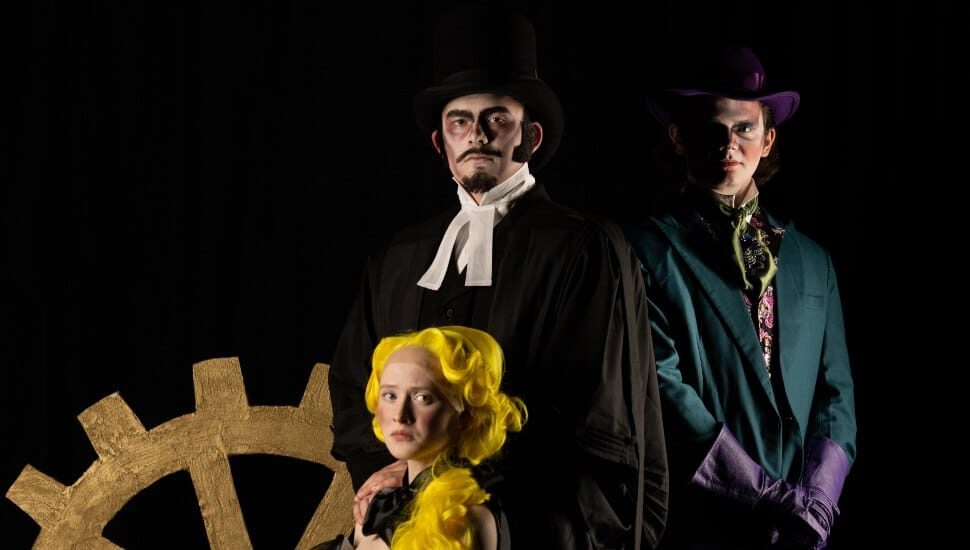 Image via The Hill School.

The Hill School’s Ellis Theatre Guild is cooking up another spectacular Broadway-style show for its 2022 fall musical, as four performances of Sweeney Todd will be held in the Center for The Arts Theatre from Friday, Nov. 11 through Sunday, Nov. 13.

Tickets are free but must be reserved in advance. (Tickets are no longer available for Friday’s performance.)

“Hauntingly beautiful.” These are the words Center for The Arts Director and Theatre Director Chris McGriff uses to describe Hill’s interpretation of Sweeney Todd. In true Chris McGriff fashion, there will be a few twists and turns along the journey, as Hill brings this dark tale to life on stage.

“The approach we’re taking with staging and design is very different from the original musical,” McGriff said. “Sweeney Todd is usually a show that’s copied from the original. However, our production will break away completely from that.”

When asked about the inspiration for this season’s show, McGriff wanted to pay homage to the late Stephen Sondheim, who wrote the music and lyrics for Sweeney Todd.

“I knew how much Sondheim enjoyed watching our rendition of Into the Woods (which he also wrote),” said McGriff. “This is our way of honoring him.”

Just like Into the Woods, McGriff received permission from Sondheim’s estate to feature new orchestrations for Hill’s production of Sweeney Todd.

McGriff also said that when considering options for the fall production, Sweeney Todd was an obvious choice based on the potential of the cast.

Luke Gerdeman, a senior from Chester Springs, will take on the role of Sweeney Todd. Lizzie Hopper, a senior from Santa Monica, Calif., will star in her first lead role as Mrs. Lovett. They will be joined by a “small and mighty” cast and ensemble of 13 other students.

“This is Luke’s second time in a lead role in a Sondheim show since he was ‘the Baker’ in Into the Woods,” said McGriff. “I’m excited for everyone to see him in this role. I think it’s really going to shock people. Everyone knows Luke as the funny, goofy type so seeing him play Sweeney is going to be amazing.”

“Lizzie was Aunt Em last year in Love, Dot, and this is her first major, lead role,” said McGriff. “She has such good comedic timing and really plays well off Luke. They have great stage chemistry.”

In addition to the updated orchestrations and new cast members, this will be the first time a show in the Center for The Arts Theatre will feature full surround sound. Combined with jump scares, McGriff warns the audience will “constantly be on their toes!”

In Sweeney Todd, Bobby Goodrich steps in as the full production designer. In the past, he designed the custom wigs and elaborate costumes for Hill’s productions, including Love, Dot and Hairspray. In addition to wigs and costumes for Sweeney Todd, Goodrich will oversee the design of the gothic-style set, which will be a bold departure from the show’s original design.

Joining Goodrich and McGriff are Technical Director Peter Gorneault, who has the privilege of working with the largest crew of student-technicians since he joined Hill, all of whom are eager to showcase the hard work they do behind the scenes; Laura Cobbs, Hill’s adjunct dance instructor, leading the cast in choreography; and guest musical director will Kevin DeLisa, who completed a two-week intensive with the cast at the beginning of rehearsals.

Sweeney Todd is known to be a very dark, chilling musical. Therefore, The Hill School asks that all children under the age of 13 be accompanied by an adult.

Reserve tickets to Sweeney Todd at The Hill School.