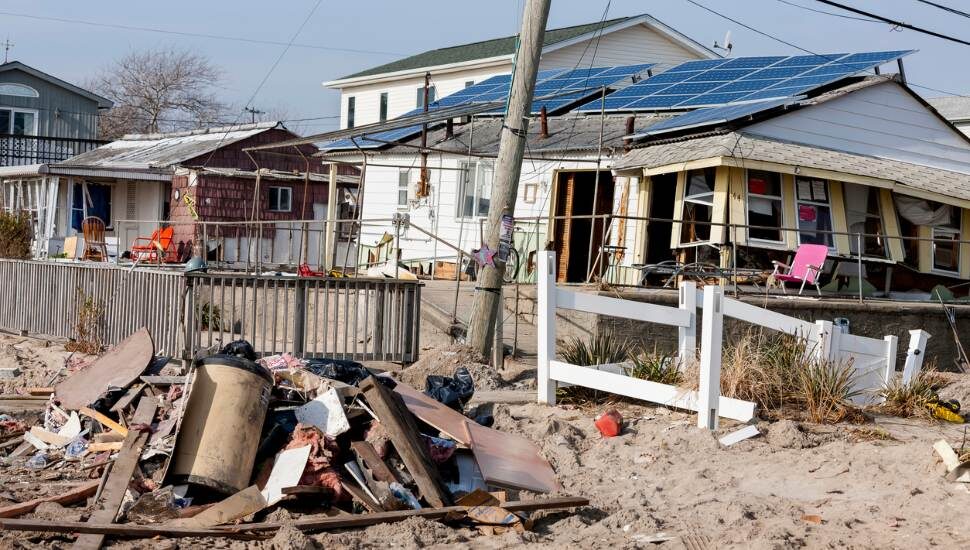 Image via iStock.
Damage from Hurricane Sandy; it's been a decade since rescuers from Ardmore’s Merion Fire Company arrived onsite at night to help.

In late Oct. 2012, Hurricane Sandy’s path blasted from the Caribbean to Canada with 12 days of wind, rain, and havoc.

After its exit, Merion Fire Company — aided by the Ardmore Rotary — kicked into rescue mode, a role it played frequently in widespread, out-of-county disasters.

Ryan Tomkinson, fire company board member, remembers feeling impelled to go for reasons that included the local fondness for the Jersey Shore as a vacation spot.

Donated necessaries were loaded into trucks, which also came gratis.

Using his fire-chief contacts, Tomkinson identified where the needs were greatest and landed in Toms River.

Arriving in town, the crew immediately noticed the former high-water marks on homes. Although the ocean had receded, the signs of its depth were taller than the height of the responders, Tomkinson said.

The crew’s reception when they finally found the Pleasant Plains Volunteer Fire Department in the dark, was memorable: The woman who answered the door broke into tears at the news that help had arrived.

A bond formed that night, one that has lasted.

More on the Merion Fire Company response to Hurricane Sandy is at the Ardmore-Merion-Wynnewood Patch.

Here’s a look, for those who may not remember a decade ago, of the effects of Hurricane Sandy.

Hurricane Ida Anniversary Has Upper Dublin in Memory Mode: ‘It Looked Like a Zombie Apocalypse’