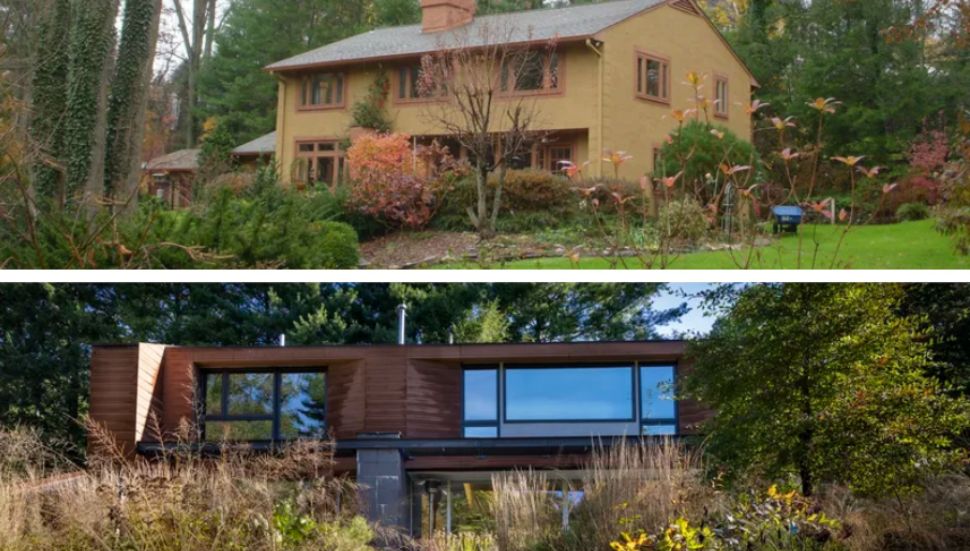 Images via homeowner Jasmin Fung and photographer Alejandro A. Alvarez at The Philadelphia Inquirer.
Before/after shots of the Fung-Lyons renovated home in Gladwyne; the transformation took a decade.

Married couple Jasmin Fung and Steve Lyons launched a Main Line house hunting expedition in 2012. Not finding anything they liked, they bought an existing house and spent the next decade transforming it. Paul Jablow nailed this story of a significant Gladwyne renovation in The Philadelphia Inquirer.

Fung and Lyons spent a year house hunting before deciding to purchase a 1952-built “hodgepodge” of a Gladwyne residence. Its visual style reflected Colonial and Mediterranean with plenty of 1980s–1990s accents, incongruously set on a wooded lot.

With the help of Phila. architect Adam Montalbano — located by random Internet search — the couple embarked on a six-stage, ten-year overhaul.

The phases of their Gladwyne renovation would address:

The challenges were many.

To brighten the interior with a large window, steel beams had to be mounted to support the roof above it.

And the first-floor work, which removed all the load-bearing walls to create space, was particularly dicey.

“A final design challenge was to [build] the main staircase, which is actually hung from the second floor with steel rods,” Montalbano said.

With the rebuild nearly completed, Fung and Lyons are content to nest in their refreshed home.

More on this Gladwyne renovation is at The Philadelphia Inquirer.