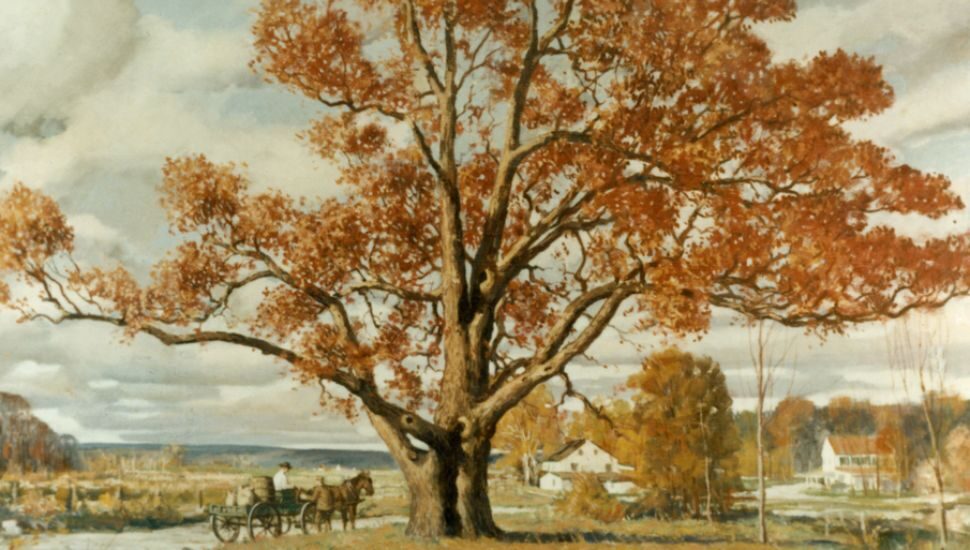 Image via the Upper Merion Park & Historic Foundation at the King of Prussia Historical Society.
The Drinker Oak, which once graced a plot near the intersection of today's Route 202 and South Gulph Road.

A King of Prussia Historical Society Facebook post recently recalled “The Drinker Oak,” a massive tree that once graced the intersection of Route 202 and S. Gulph Road. The tree’s exact age was undetermined; however, 40 years ago — Dec. 2, 1982 — disease caused its removal.

The KoP Historical Society identified it as a great White American Oak.

Its nickname, The Drinker Oak, didn’t come until 1933, when the Pa. Forestry Association’s president emeritus officially dedicated it.

But well before that, it a common landmark. Meetings took place under its canopy, and it became a directional reference point for travelers on foot, horseback, and in cars.

Over time, Upper Merion’s roadways needed renovating to keep up with population and commerce growth. One road project necessitated the removal of several tree roots from the fabled tree; however, The Drinker Oak nonetheless thrived.

In 1979, it was named an official “Penn Tree,” joining a list of only 40 remaining trees statewide from the pre-William Penn era.

But the ravages of time and disease were beginning to take their toll on the arboreal wonder.

Its weakening core represented a danger should it ever topple — or even lose some massive branches.

A replacement was planted, but a wayward car from the Wawa parking lot took that out, and it was never replaced.

More on The Drinker Oak is on the King of Prussia Historical Society’s Facebook page.

King of Prussia Building That Houses Qlik Sells for $25.8M