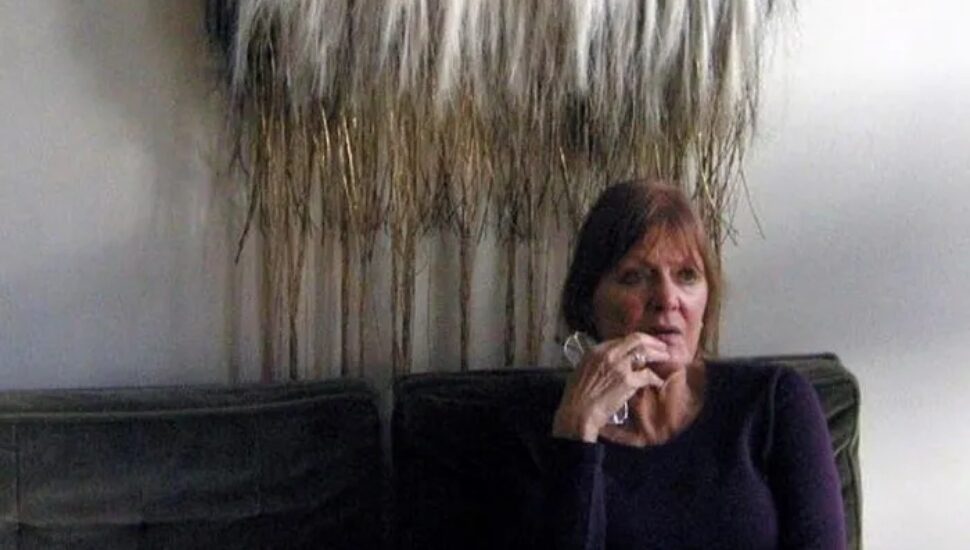 Image via family, The Philadelphia Inquirer.
Yvonne Bobrowicz with one of her fiber sculptures.

Fiber arts masterpiece-maker Yvonne Pacanovsky Bobrowicz has passed away at the age of 94, writes Gary Miles for The Philadelphia Inquirer. She was known for her ghostly woven sculptures that cascaded ten feet long in exhibitions around the world. But this internationally recognized craft-master actually got her start in Pottstown.

That’s where her first weaving studio opened in 1950. Bobrowicz then took what turned out to be a 72-year career to Philadelphia after she got married. It was the City of Brotherly Love where she became a longtime lecturer at Drexel University and held a permanent collection at the Philadelphia Museum of Art.

Her ethereal three-dimensional fibers are constructed to interact with the air and light surrounding them. Bobrowicz studied theories connecting light, space, time, and movement as a guideline for her life’s work.

According to Inquirer critic Victoria Donohoe, “even the slightest air current will set off a diffused stir of motion, meant to suggest the constant motion, change and growth in the universe. … Such a sculptural piece finds its place as a true work of art.”

She took her graceful expertise outside of the area, directing workshops across the U.S. and Canada. In addition to the Philly Art Museum, her work also permanently resides at the Art Institute of Chicago, Racine Art Museum in Wisconsin and the National Museum of Sweden in Stockholm.

She was married to fellow artist Joseph Bobrowicz for 70 years. They had one son and two daughters, one of whom had passed away earlier.

“She was a wonderful, kind, loving person who gave of herself,” said her daughter Shelley. “She was very involved in her children’s lives.”

Read more about the celestial and intricate works of Philadelphia-based artist Yvonne Pacanovsky Bobrowicz at The Philadelphia Inquirer.