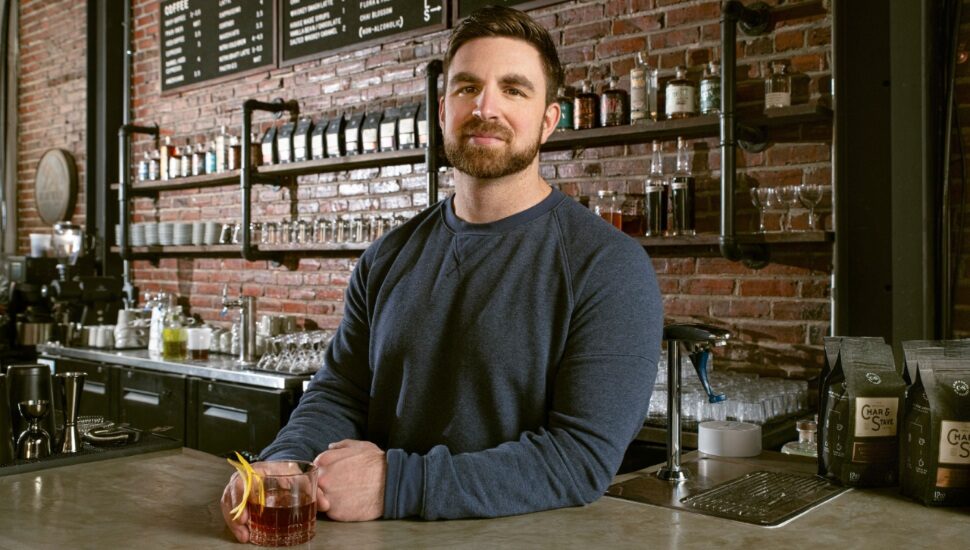 Jared Adkins, Founder and Master Distiller of the acclaimed Phoenixville distillery, Bluebird Distilling, is expanding his business beyond grain-to-glass spirits.

His sister company, Char & Stave Coffee, is using the methodology he’s focused on for more than eight years as an award-winning distiller, to coffee, with a brand-new roastery plus flagship all-day café and cocktail bar, slated to open its doors the week of Monday, March 21, featuring signature barrel-aged roasts.

After years of creating world-class spirits at Phoenixville’s Bluebird Distilling, and occasionally roasting beans purely for their own enjoyment, Adkins and his Head Distiller, Scott Gilbert, an avid coffee roaster of 15+ years, are taking their technical skills to coffee in a more public-facing way.

They are utilizing a process strikingly similar to the aging process of Bluebird Distilling’s wide catalog of brown spirits.

The result is specialty Barrel-Aged Roasts, such as Char & Stave’s flagship Four Grain Bourbon Aged Blend, which is aged in brown spirit barrels used to make the distillery’s noted whiskeys and bourbons.

The beans will be aged, barreled, roasted and packaged on-site at the Phoenixville distillery and transported to Ardmore.

“The name ‘Char & Stave’ comes from the barrels we use for aging our bourbon and now, coffee,” said Adkins. “The stave is one of the 21 pieces of oak that make up a barrel and the char is the inside layer of the barrel which holds the residual vanilla, bourbon and spice notes. I’m beyond excited to take the methodology of Bluebird Distilling and apply those processes to the coffee world, specifically with our signature barrel-aged roasts.”

The key to aging coffee correctly is the moisture content of the barrel – not too wet and not too dry – and because Adkins is using his own whiskey barrels, he’s able to calculate the moisture levels perfectly and pick the best barrels for aging beans. The coffee beans are imparted with the familiar flavors and spices in whiskey left in the wooden barrels, such as vanilla, toffee, and cedar. And like whiskey, the coffee beans in the barrels get better with age.

“The beans are then roasted on a traditional drum roaster using new-age virtual technology to track, record, and make real-time adjustments,” said Adkins. “We are able to dial in our roasting to our exact diameters, meaning we have the ability to draw different, specific flavors out of beans.”

Coffee drinkers can get their fix at the cozy Char & Stave coffee bar beginning at 7 am during the week and 8 am on the weekends, with a selection of classic and nouveau breakfast beverages spanning everything from traditionally brewed coffee to Char & Stave’s signature barrel-aged espresso, Nitro Cold Brew, Nitro Draft Lattes and a Whiskey Smash Latte, along with a bevy of pastries and baked goods from local purveyors.

A selection of signature cocktails and mocktails will also be available to enjoy throughout the day and into the evening, as Char & Stave’s transitional lounge seating transforms from a bright and airy coffee bar into a chic and alluring whiskey lounge.