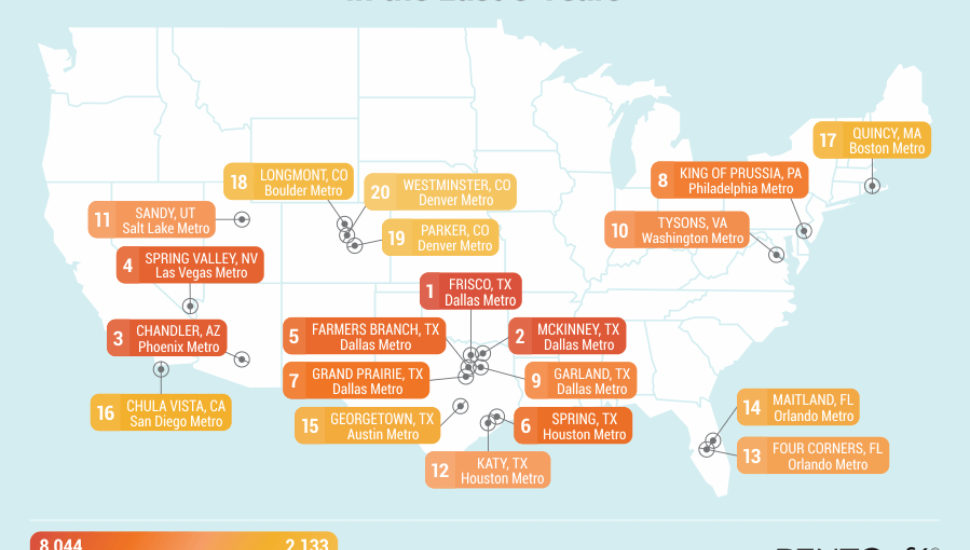 Image via RentCafe.
Top 20 Suburbs with the most new apartments built in the last five years. King of Prussia is among the top 20 suburbs for multifamily development in the nation, according to a new ranking published by RENTCafe.com.

King of Prussia is among the top 20 suburbs for multifamily development in the nation, according to a new ranking published by RENTCafe.com.

In the search for top booming suburbs for renters, RENTCafe.com looked at Yardi Matrix data for all rental units built between 2016 and 2020 in multifamily properties of at least 50 units and population data from the U.S. Census Bureau.

King of Prussia – one of the rare northern suburbs in the national top 20 that is otherwise dominated by Texas cities and other southern areas – ranked in the top ten in eighth place with 3,030 new apartments built over the last five years.

This means that the Montgomery County town with a population of 20,428 has doubled its number of apartments in just half a decade.

These apartments are located within nine new residential rental buildings, most of which are mid-rise.

Within Pennsylvania, Willow Grove also made the top five suburbs for multifamily development with 521 new units.

Other Philadelphia area cities included in Pennsylvania’s top five are Phoenixville in second and Malvern in third place.

Read more about top booming suburbs for renters at RENTCafe.com by clicking here.

Real EstateApartment complex in King of Prussia's The Village at Valley Forge trades for $75MDecember 21, 2018

King of Prussia$18.5M Renovation, DoubleTree by Hilton Philadelphia-Valley Forge to Reopen as the Alloy - King of PrussiaJune 29, 2020