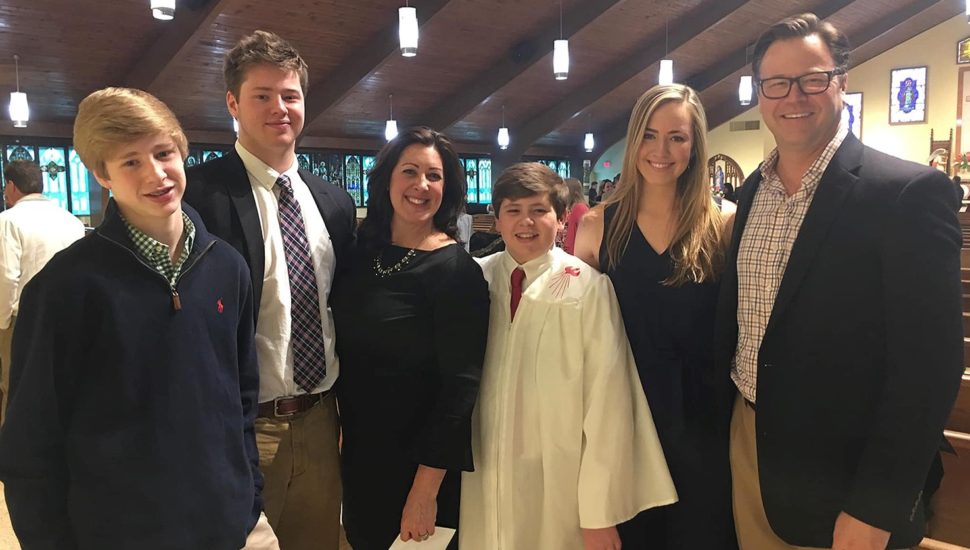 Andy and Trish Phillips with their four children.

Chester Springs resident Trish Phillips, whose family has been shattered by COVID-19, is now sharing her story, hoping to warn others to not take the threat of coronavirus lightly, writes Caroline O’Halloran for SAVVY Main Line.

Phillips’s husband, Andy, contracted the virus in the early days of the pandemic. Despite being healthy and in great shape, he was knocked off his feet by COVID-19.

Soon, the entire family had the virus, including all four of the couple’s children. Andy and the oldest son, Colin, were admitted to the ICU. While Colin recovered, Andy had to go on a ventilator.

After more than a month in the ICU, the doctors told Phillips there was nothing more they could do. She arranged for him to be transferred to the Hospital at the University of Pennsylvania, where he was put on ECMO (extracorporeal life support).

Around that time, his father, Donald, also contracted the virus and died several days later.

Praying her children would not lose their grandfather and their father, Phillips kept hoping for a miraculous recovery. Meanwhile, his friends tried to keep him engaged with recorded messages from his idols, including Eagles coach Doug Pederson, quarterback Carson Wentz, Villanova basketball coach Jay Wright, and Sylvester Stallone.

Phillips and her children are now imploring people to take this threat seriously. Phillips spoke to People magazine last summer and will also appear on 60 Minutes in early December.

She said that she has friends who “still think it was just crazy that it happened to us and it’s not going to happen to them. But it can touch anybody. That’s something people still don’t quite understand.”