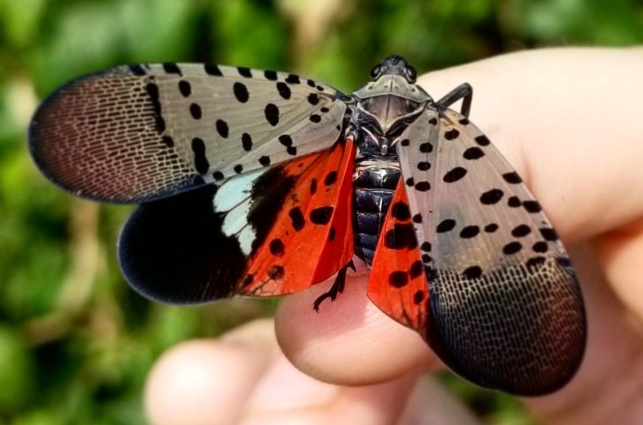 Penn State researchers have started a search for native birds and insects that kill and eat spotted lanternfly, the insect that has been wreaking havoc throughout PA. Image via the Pennsylvania Department of Agriculture. Image via Reddit.

Penn State researchers have started a search for native birds and insects that kill and eat spotted lanternfly, the Asia-native insect that has been wreaking havoc throughout Pennsylvania, writes Marcus Schneck for the Pittsburgh Post-Gazette.

“Because the spotted lanternfly is a non-native insect, it doesn’t have natural enemies in the U.S. to keep its numbers in balance,” said Kelli Hoover, professor of entomology in Penn State’s College of Agricultural Sciences.

Locating predators that are native to “our environment would be a great biological control option and useful in guiding management practices,” she added.

Hoover, together with Anne Johnson, a doctoral candidate in entomology, are spearheading a study that looks into the potential for local wildlife to feed on the invasive pest.

In Asia, several predators keep the spotted lanternfly population in check, including a parasitic wasp. However, importing any new species into the country would take several years to go through the regulatory process.

Meanwhile, researchers are hoping to locate some native species that may prey on spotted lanternfly and find a way to encourage this behavior. Then those species could be used more effectively in control programs.

Read more about spotted lanternfly at the Pittsburgh Post-Gazette by clicking here.