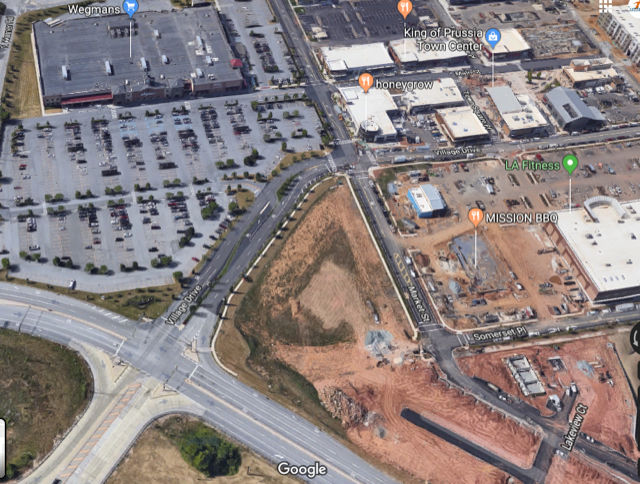 The final 3.19-acre parcel of The Village at Valley Forge is up for sale, the last of the land that was once the Valley Forge Golf Club. (Image courtesy of Google Maps).

And then there was one.

A 3.19-acre parcel referred to as One Market St. that fronts North Gulph Road and is located across from the entrance to the Schuylkill Expressway and Pennsylvania Turnpike has hit the market, the last of the land that was once the Valley Forge Golf Club.

But the last is also apparently the best.

“It’s literally the last site,” Dennis Maloomian of Realen Properties told Natalie Kostelni of the Philadelphia Business Journal. “This is our best site. It always has been.”

The Village at Valley Forge is a 126-acre mixed-use community that has provided King of Prussia with a contemporary version of a new downtown.

Saving the best for last was always part of the development plan for the Village at Valley Forge and it may well be the priciest piece of ground to be sold there.

It’s well-known King of Prussia is a valuable piece of real estate. Based on past transactions, prices for land at the development has been steadily rising with each sale and now trades for around $10 million an acre. This parcel has the potential to trade for just as much if not more.

Maloomian declined to speculate on how much it could ultimately fetch.

So what does the future hold?

There are several options for what could be built on the property. Based on zoning, it could accommodate upwards of 300,000 square feet of space and a building that could rise 250 feet, or roughly 20 stories.

The options include medical or office space such as a corporate headquarters; an apartment complex with 350 units; a hotel with 775 rooms; or a building with a combination of hotel rooms and residential units.

Realen bought the land in 1996 and, after having fought multiple, extended legal battles over its zoning, finally won in court to move forward with its development.

At this point, 2,900 residential units involving a mix of apartments, townhouses, flexible stay and senior housing have been constructed.

More apartments could be on the way. A smaller property on Guthrie Road across from Creed’s restaurant, is being eyed for a multifamily project that would be similar to Park Square, a 313-unit complex at 751 Vandenberg Road in King of Prussia, according to sources.

Aside from the residential projects, 400,000 square feet of retail space has been developed between the Wegmans and the King of Prussia Town Center, which are bustling with diners and shoppers.

A total of 425,000 square feet of medical space has or will be built between Main Line Health and Children’s Hospital of Philadelphia.