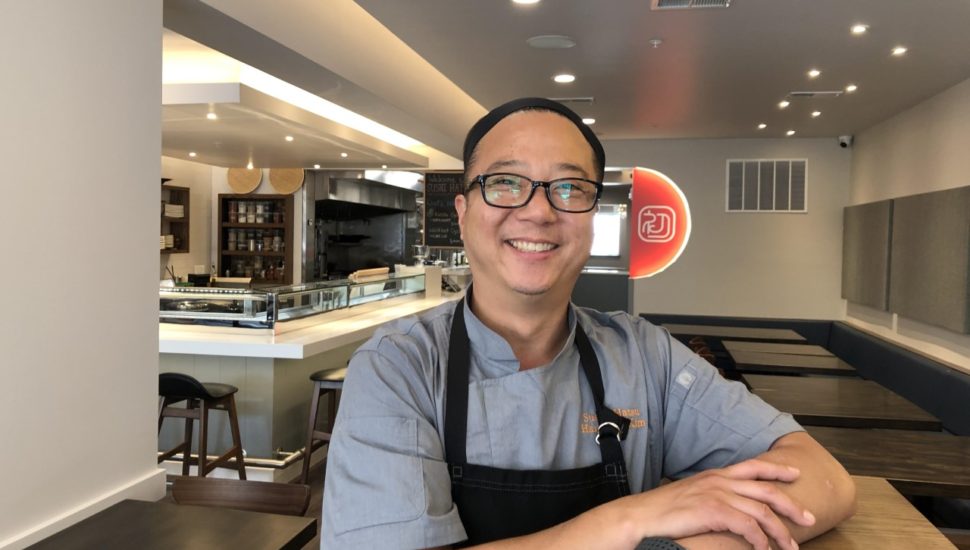 Chef Harrison Kim has teamed up with seasoned restaurant builder Frank Lott to open Sushi Hatsu at 51 E. Butler Avenue in Ambler, PA — the site of the former Ambler Cabaret.

The new BYO restaurant will seat 75 guests, with an additional 11 seats at a sleek sushi bar, and two dozen more seats in a private dining room. Veteran chef Kim describes the menu as “a chef-driven modern take on sushi with a serious focus on seasonal, shareable tapas-style plates. It’s a melting pot of cultures, but the foundation is fueled by traditional, classic Japanese and Asian techniques,” explained Kim. “We have a sushi bar, but we’re also serving crudo and carpaccio, as well as fresh oysters, King crab, scallops and lobster at our raw bar.”

Hatsu means new beginnings in Japanese – “a fitting name,” notes Chef Kim. The 43-year-old, whose impressive resume includes stints at Morimoto in Philadelphia and Nobu in San Diego, grew up working every job in the restaurant business, but this is the first time Kim is at the helm of his very own restaurant. And this “new beginning” almost didn’t happen for Kim, who ran into some lean times trying to bring his restaurant dream to life. “I did all sorts of jobs, scrimped and saved while I searched for investors for nearly two years — I even drove for Uber to make ends meet,” said Kim, “because failure was not an option.”

Impressed by his tenacity and drive, Frank Lott, who owns LOTT Restaurant Construction, signed on to help fund the $600,000 project and build the restaurant. “The partnership was formed when Harrison was having difficulties raising capital, and he told me even if he had to ‘build the restaurant with his own two hands’ he was going to do it. After I heard his story, I met with him and realized that he approaches culinary operations the same way that I approach building out a restaurant. He was deep into the statistics and systems, which I could appreciate because that’s how I build my restaurants,” said Lott, whose client list includes more than 400 restaurant and hospitality buildouts including Harvest Seasonal Grill and Wine Bar, Yiro Yiro, Spread Bagelry, Naf Naf Grill and Snap Kitchen in the Philadelphia area.

“Just like the menu, the decor is clean, modern, minimalist but comfortable,” says Kim. Designer Jimi Nolan bathed the 1,900-square-foot restaurant in a Gotham gray tone with a handful of wood finishes. Kim describes the interior as modern farmhouse meets industrial chic, with vintage tobacco floors, walnut-top tables and Mid-Century walnut and black leather chairs. The sushi bar is topped with a HI-MACS® counter top. The custom-designed Yoshimasa sushi case was built in California; the design originated from ideas developed by Kim, Nolan and Lott.

Sushi Hatsu is open for dinner only, but take-out will begin shortly, and Kim is considering opening for lunch in the fall. Hatsu is open Tuesdays through Thursdays from 5 to 10 p.m.; Fridays & Saturdays from 5 to 11 p.m.; and Sunday from 4 to 9 p.m. To learn more, please visit https://sushihatsu.com.

Ambler-Based Columnist Weighs in on Prince Harry and Meghan, Duchess of Sussex