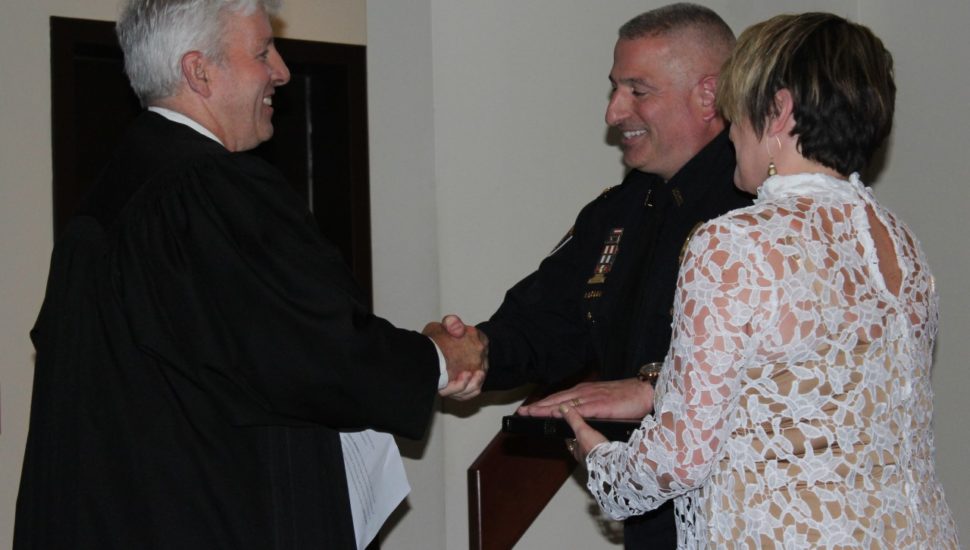 Deputy Chief John Myrsiades fills the seat vacated by Joseph Lawrence. A standing-room-only crowd joined the Plymouth Township Council in welcoming new Police Chief John Myrsiades, who was formally sworn in during Monday’s council meeting, according to a press release.

Myrsiades began his career with Plymouth Township in 1989 when he joined the force as a probationary officer. He is only the second police officer ever to serve in every rank of the police department.

“You understand this police department from the bottom up,” Councilwoman Karen Bramblett told Myrsiades, referring to his three-decade-long history with Plymouth Township.

In 1992 he was promoted to a first-class patrolman and advanced to detective sergeant in 1996. Myrsiades was moved up to lieutenant in 1998 and deputy chief in 2009.

Judge Frank Bernhardt swore in Myrsiades. Afterward, his wife pinned on his new badge to thunderous cheers and applause.

Chief Myrsiades graduated from the police academy at Montgomery County Community College. In 2010 he attended the FBI National Academy. He has received numerous commendations for bravery and expressions of thanks throughout his career.

“We have high hopes for John,” Council Chairman Marty Higgins said, adding that he was impressed that during the 2.5-hour-long interview Myrsiades was prepared and “had the answers.”

“We’re just glad to have John as our new chief,” Higgins said.

Following his swearing in, Myrsiades thanked the governing body for the honor and privilege to lead the police department. He said he was “grateful for three wonderful children” who provide him with “purpose” and “inspiration” and called his wife his “rock,” “confidant” and said she is his “life.”

“I am humbled to call myself your chief,” Myrsiades said. “You are my heroes.”

Council Vice Chairman Christopher Manero said residents had contacted him inquiring if the governing body had planned to promote Myrsiades to chief.

“You have a lot of trust in the community,” Manero said.

With the promotion, Myrsiades replaces Joseph Lawrence, who retired earlier this month.

In other business, the Council voted unanimously to recognize Public Works employee Paul Gregory for 30 years of service.