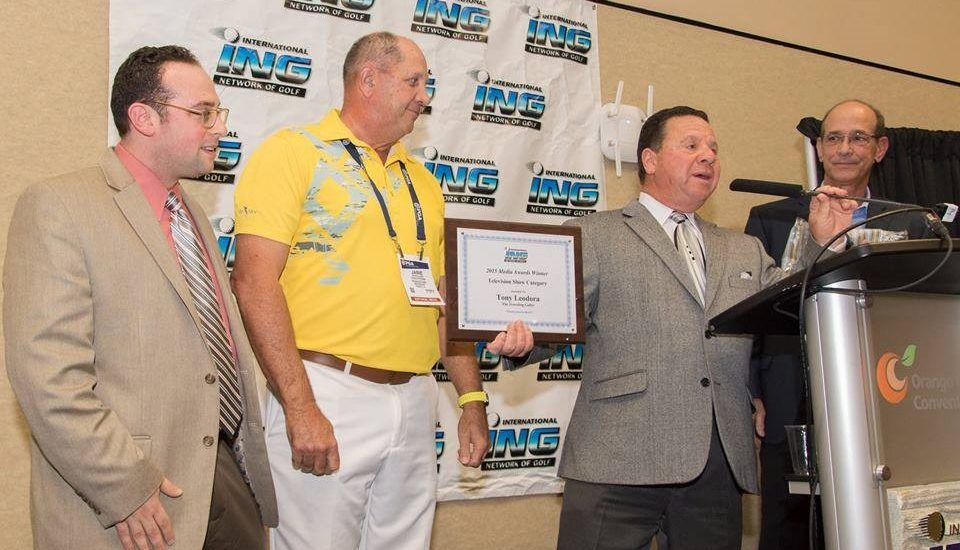 The Traveling Golfer receives an Outstanding Achievement Award after three years in a row as the No.1 golf television show in America.
The Traveling Golfer television show – hosted by Tony Leodora, with producer Jamie McWilliams and associate producer Eddie Caiazzo – once again has been recognized for television excellence. The show received an Outstanding Achievement Award, presented by the International Network of Golf at the
PGA Merchandise Show in Orlando. This follows three consecutive years of being named
the No. 1 Golf Television Show in America.
Wednesday, in a packed ING meeting room at the PGA Show, the Traveling Golfer show
received the award from among a record number of entries in the highly competitive
category. In only its fifth year on air, the Traveling Golfer show prevailed after submitting
the show it did from The Abaco Club in the Bahamas.
[uam_ad id=”54865″]
“We had a spectacular location, with a great story to tell about a renovated Donald Steele
and Tom Mackenzie-designed golf course” explained Leodora, who accepted the award on
behalf of the entire Traveling Golfer team. “This private club/paradise is in a lesser known
and more relaxed area of The Bahamas. The key was to portray that laid-back lifestyle.”
While The Abaco Club show was the one submitted to the panel of judges for this year’s
award, Leodora is quick to point out that any number of shows from 2018 could have been
judged as winners.
“We did shows from places like Florida’s First Coast of Golf, St. Michael’s on the
Chesapeake Bay, Sebring (Fla.), the Outer Banks of North Carolina and Myrtle Beach,” said Leodora. “The variety of host venues is a key contributor to the success of the show.”
The Traveling Golfer show runs monthly on the Traveling Golfer network of websites including The Golf Director Network (see full list of sites on  travelinggolfervideo.com ). It also airs each month as part of the Rivertalk television show in Myrtle Beach on HTC Ch. 4.
The main television exposure for the Traveling Golfer comes from its scheduled weekly
feature show on NBC Sports and NBC Sports + throughout the Northeast and Mid-Atlantic
regions. NBC Sports airings are 10:30 a.m. Sundays, 11 p.m. on Tuesdays and 11 a.m.
Thursdays. NBC Sports + airs the show at 6 p.m. Mondays and Fridays.
As part of every Traveling Golfer show there is the additional feature, ‘Tech Talk’, hosted
by Tour Edge Golf experts, such as President Dave Glod. With years of experience as a
club maker, Glod presents an inside look at the research and development of high-quality
golf equipment.
Responding to golfers’ never-ending demands to learn more about interesting golf courses
and golf resorts across the country and around the world, well-traveled host Tony Leodora
created the Traveling Golfer in February of 2013 so he could take viewers on video trips to
some of the most exciting golf locations.
The Traveling Golfer is a series of monthly shows hosted by Leodora, who has 18 years of
experience in televised golf. The featured destination stays on the website for one month,
before being replaced by a new show. The old shows are archived for continued viewing on
home website,  www.travelinggolfervideo.com.
For more information about the Traveling Golfer, or to find out how your property can be
featured on the show, call TL Golf Services at (610) 279-9220.
[uam_ad id=”54875″]
Tags: PGA, The Abaco Club, Tony Leodora, Traveling Golfer