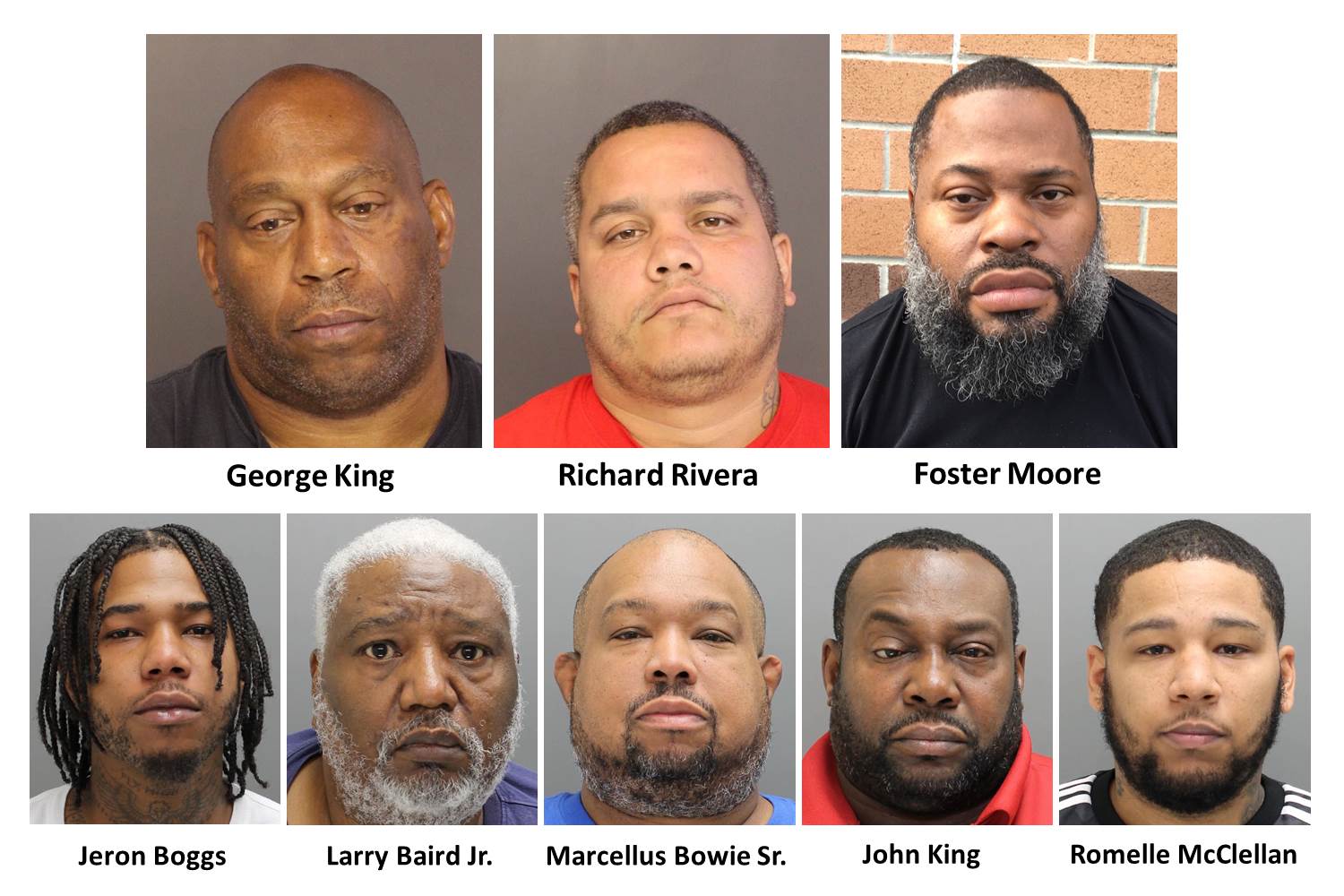 Montgomery County District Attorney Kevin Steele and other local, state and federal authorities announced Friday that eight leaders of a drug- trafficking organization that was distributing heroin, cocaine and other illegal drugs in Montgomery, Philadelphia and Chester counties have been charged.

George King was also charged with a firearm violation.

Eleven other individuals are also being charged with various drug trafficking and possession charges.

“This is another case of these men peddling poison to those suffering from addiction — all in the name of greed,” Steele said. “George King, who was reportedly moving 75 to 100 bundles of heroin a week along with cocaine, was the center of it all, and he was being supplied by Rivera and Moore. By taking these three major drug traffickers and their five other lieutenants off the street, as well as locking up their lower-level dealers, we have once again cut off a major source of heroin in Montgomery County and hopefully have made a dent in the region’s drug pipeline. This multi-agency investigation that put these dealers out of commission is just one way we are working to make a difference in the heroin-opioid epidemic in Montgomery County.”

The investigation involved the use of electronic surveillance, visual surveillance, fixed surveillance, search warrants, court orders, controlled purchases of narcotics, use of confidential sources, and analysis of recorded phone calls at the Montgomery County Correctional Facility and the Pennsylvania Corrections system.

On Sept. 25, 2018, multiple search warrants were obtained and served on the residences, vehicles and persons of the eight major traffickers.

Search warrants yielded a significant number of bags of heroin; varying amounts of cocaine and crack cocaine; pills such as oxycodone, Klonopin and Clonazepam; and methamphetamine, much of which is still undergoing testing and weighing at National Medical Services laboratory.

Twenty-four handguns, long guns and an AK-47 were also seized. Also seized was drug cutting agents, drug-packaging materials and more than $17,000 in cash.

All other defendants were unable to post bail and remain in Montgomery County Correctional Facility. A preliminary hearing is scheduled for the defendants at noon, Nov. 16, 2018, before Judge Hunsicker.

The case will be prosecuted by Assistant Chief of the Trials Division Lauren Heron and Assistant District Attorney Lindsey Mills.

“I’ve said it before to dealers and I’ll say it again: Don’t peddle your poison in Montgomery County,” said Steele. “Our law enforcement community is committed to working together to track down and prosecute dealers who are looking to profit from someone’s addiction and pain.”

The arrests were the result of a multi-agency investigation involving:

• Pennsylvania Office of the Attorney General