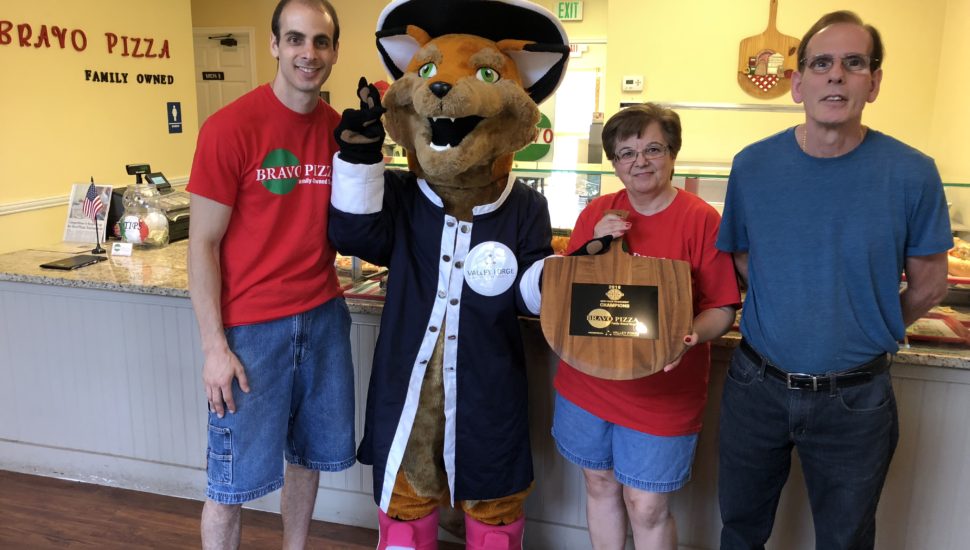 The Valley Forge Tourism & Convention Board presented an engraved plaque mounted on a wooden pizza paddle as a trophy June 7 to Montco’s Best Pizza Tournament Winner, Bravo in Worcester.

“We are truly blessed!” said Salvatore Sparacio of Bravo. “We want to thank our customers so much for their support. They’re amazing!”

The Final Four were: Bravo in Worcester, Tony & Joe’s in Conshohocken, Via Veneto in Norristown, and Vince & Friends in East Greenville. Bravo faced Vince & Friends for the championship, according to a press release.

For the third year in a row, the Valley Forge Tourism & Convention Board sliced through the competition to find out which local pie is primo.

The organization called for nominations of people’s favorite pizza places on social media throughout the month of February, and narrowed the list of hundreds down to 64 contenders that people began voting on March 1.

This year, there were 32 new competitors to start. The pizza shops also received a marketing kit, delivered by hand in a pizza box carton. Inside were giveaway magnets, a pad of tear-off voting requests to accompany customers’ checks, and a copy of Crave, the VFTCB’s award-winning dining guide. New this year, the box also included a poster to advertise the tournament in or outside the store.

The tournament began in 2016 when the VFTCB’s social media pages got heated over a list of recommended pizza shops, and the organization took the opportunity to create a community-involved contest with the March Madness-style bracketed competition, originally pitting 32 pizza places against each other.

“We’ve continued to see the passion that people in this area have for their pizza!” said Ed Harris, VFTCB’s Chief Marketing Officer. “The contest really engages the community, and offers such a great opportunity for businesses across Montgomery County.”

Chiaro’s Pizzeria & Restaurant, Green Lane, was crowned champion two years in a row, but did not compete in this year’s contest.

While the discussion often diverts into an active debate on tomato pie, the VFTCB has ruled that the doughy, saucy concoction doesn’t constitute pizza. All votes were cast online at valleyforge.org/pizza.

The tournament leverages the VFTCB’s considerable social media reach. Last year, the VFTCB saw an upswing in social media-driven click throughs to its website, which surged more than 1,000 percent over the course of the year. The best-pizza topic reached more than 400,000 people on Facebook, and its associated YouTube videos were watched more than 80,000 times.

The Marketing and Communications successes have caught the eye of several third-party industry awards organizations, earning three awards by firms that included PR News, a best-practice publisher with editorial offices in New York.

Second Location for Árdana Food and Drink Opening in Newtown