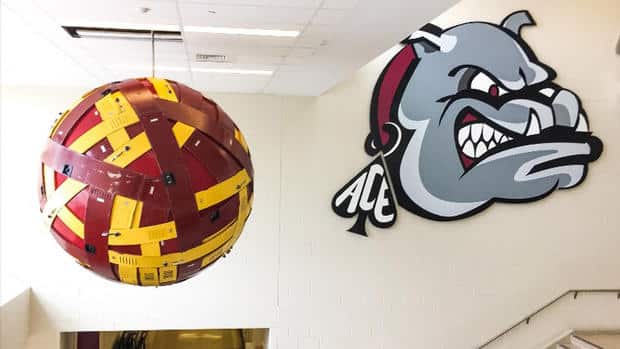 The sculpture, which was unveiled on Thursday outside of the Bryant Gymnasium, is made exclusively of locker doors that were salvaged during the school’s renovation seven years ago. When demolition began, Gard was contacted by the school to see if he could create a unique piece for the space.

“When I spent some time in the building, I just realized the locker doors are the most recognizable part of the whole school,” explained Gard. “The locker meant so much to me because for the first time I had personal space to lock up and store my things.”

His love of basic shapes influenced the decision to shape the doors into a sphere. He felt this would allow people of all ages to find special meaning in the project, as everybody can recognize a ball and create their own interpretation of it.

However, he is still unsure whether his old locker door has been included in his work.

Read more about the Lockersphere at NBC10 by clicking here.

Couples: Don’t Let the 2022 Holiday Dazzle Wear You to a Frazzle; Schedule a Montco Date Night

Local Artists — Yes, Watercolorists, Too — Invited to Submit ‘Scenes of the Schuylkill’