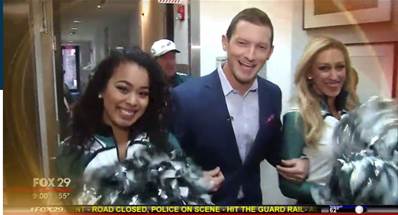 A Souderton school teacher enjoyed his recent television debut so much that he jumped at the chance to repeat the experience, writes Stephanie Tsoflias Siege for TV Spy.

Richard Curtis, a Souderton Area High School TV production teacher, first stood in front of the cameras six months ago on Live with Kelly. This time, he got the opportunity to fill in for Mike Jerrick to co-host WTXF‘s Good Day Philadelphia with Alex Holley for an entire week.

However, after he was escorted onto the set by two Eagles cheerleaders, Curtis realized that the stakes were high.

“With an entrance like that – I better not suck, right?” he joked. “That was unbelievable.”

It was an exciting time for the temporary co-host who took full advantage of the opportunity. Among his assignments on the popular show, Curtis got to test out a nose-ring look, strut onscreen and on the streets in a unique one-piece romper, and test out some of the most delicious and hottest chicken in the area.

To top it all off, Curtis received a great compliment from Jerrick at the end of the week.

“I know you are a great teacher,” he said, “but you really have a future in television.”