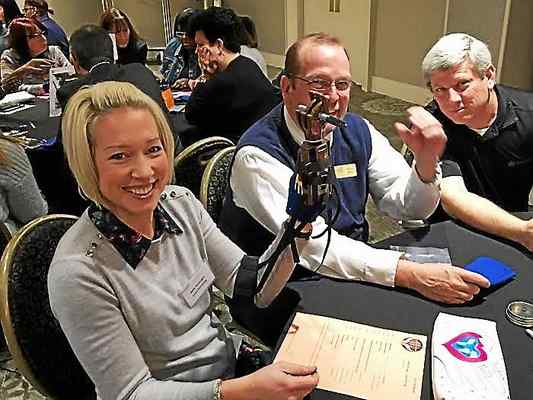 TruMark employees Kelly McGugan, Brian Miller and John Merritt revel in their success at having built a working prosthetic hand. The philanthropic project was part of the company’s annual meeting held last week in King of Prussia. (Photo and caption via The Times Herald)

Employees of TruMark Financial Credit Union from Fort Washington received a lesson in philanthropy in addition to the credit union’s 2017 strategic plan during its annual meeting on February 7 at the Radisson Hotel in Valley Forge.

TruMark Financial partnered with Odyssey Teams and The Helping Hand Project to provide employees with a “give back activity” that left participants with a sense of accomplishment.

Teams of employees used hand parts to build actual prosthetic hands which are needed by thousands of amputees around the globe who cannot afford them.

The Helping Hands “give back activity” uses experiential activities in order to guide corporate teams towards forming true collaborations.

TruMark Financial employees had built 69 pairs of newly constructed hands by the end of the meeting, which will have a life-changing effect on the lives of dozens of amputees.