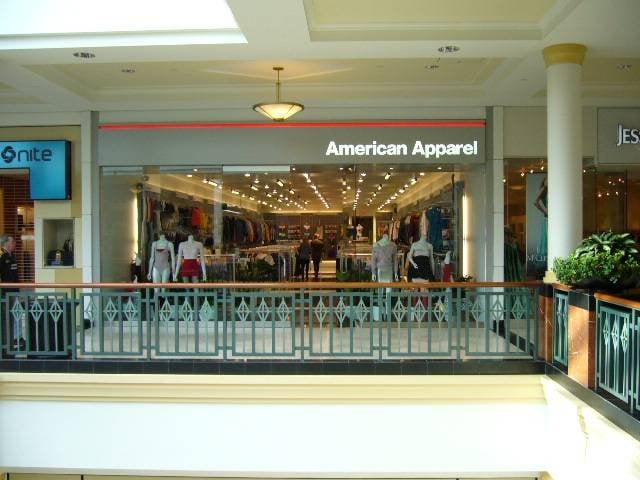 American Apparel announced Monday it would close all 110 of its brick-and-mortar stores, including the one in the King of Prussia Mall. (Image via Yelp)

Years of scandals have taken its toll on American Apparel, causing the all-American retailer to announce that it would be closing all 110 of its brick-and-mortar stores, including the one in King of Prussia, after a recent bankruptcy auction, writes Fabiola Cineas for Philadelphia Magazine.

The company, which has filed for bankruptcy twice since 2015, sold its brand to Canada’s Gildan Activewear for $88 million in last week’s auction.

The company still has not given the exact dates for store closures. However, store representatives from King of Prussia and three more Philadelphia region locations speculate that the stores will be shutting down between February and April.

Layoffs at other locations have already started. A significant number of 2,166 employees working at the company’s Los Angeles headquarters as well as close to 1,000 employees at a Los Angeles manufacturing facility will most likely lose their jobs after the new brand owner withdrew its original plan to buy some of American Apparel’s manufacturing operations.

But for now take advantage of the closing sale that offers 40 percent off on all items, both in store and online.

Read more about the closures at Philadelphia Magazine by clicking here.