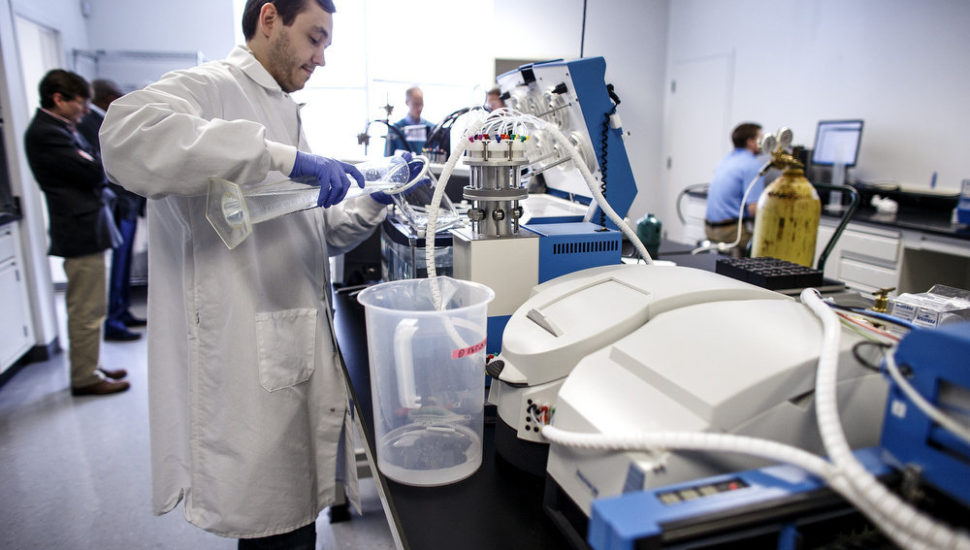 A research and development scientist is working in the iCeutica lab. Photo courtesy of Dan Gleiter, Harrisburg Patriot-News.

King of Prussia’s iCeutica Inc. is licensing its SoluMatrix Fine Patricle Technology to a nearby pharmaceutical company that produces low-dose nonsteroidal anti-inflammatory drugs for pain relief, writes John Luciew of the Harrisburg Patriot-News.

Iroko Pharmaceuticals, a global pharmaceutical company based in the Philadelphia Naval Shipyard, uses iCeutica’s technology to develop a suite of drugs as a non-opioid alternative to pain management.

According to Luciew, treating pain is a constant in medicine, and a part of the human condition, known as the “fifth vital sign” among physicians. Effectively treating pain amidst the nation’s rapid rise in opioid addiction has been a challenge.

Iroko might just have the solution, a viable alternative to opioids, thanks to iCeutica.

By harnessing nanotechnology and small-particles physics, Iroko is developing a new class of low-dose prescription painkillers. These painkillers are predicated upon a highly patented process of pulverizing drug molecules so they are up to 100 times smaller, which markedly increases their pain-killing effectiveness at dramatically lower doses.

“The practice of crushing and grinding drug powders is as old as the pharmacist’s mortar and pestle,” writes Luciew. “But there’s never been a way of pulverizing a drug molecule into nano particles that was scalable for industrial production – not until iCeutica created its SoluMatrix process, that is.”

Click here to read more about the iCeutica’s role in helping our nation curb its opioid addiction in the Harrisburg Patriot-News.