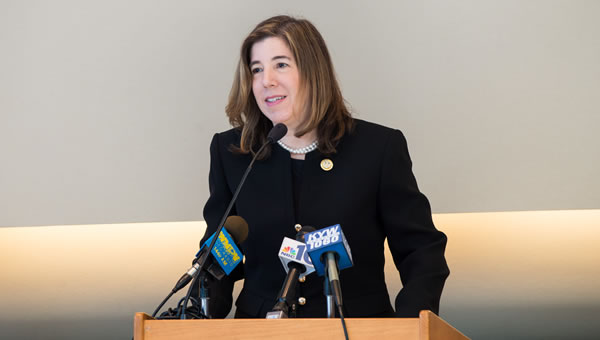 The Pennsylvania Department of Transportation manages 40,000 miles of roads and 25,000 bridges and oversees rail, ports, freight, and aviation. Harrisburg has its own creaky political infrastructure, and it has given Richards her share of challenges.

Not everyone is as eager to embrace change and innovation, as Richards discovered when she pushed to replace registration stickers with scanners that read license plates for information about vehicle records.

Richards, the former Whitemarsh Township supervisor who holds degrees in economics, urban studies, and regional planning from Brown University and the University of Pennsylvania, is eager to discuss her feelings about updating infrastructure.

She got attention last year for proposing to open the shoulders of the Schuylkill Expressway to traffic, but another idea that got less attention was adding smart signs that would update motorists on how they could divert to nearby train stops and use transit for the rest of their ride. She also wants to get the state working with universities to look at the possibilities for autonomous cars.

Richards was appointed to her post by Gov. Wolf in 2015 and still lives in Whitemarsh.

Eliminating registration stickers and replacing them with online registration by next year has been planned since 2013 and could save $3.1 million a year in printing and mailing costs, she said.

Opponents such say police departments can’t afford the technology to scan license plates without stickers and are supporting a bill to block that change. Municipalities, EMS squads, and courts depend on about $15 million a year in revenue from fines and fees. There is also the concern that data gathered by license-plate scanners might become public.