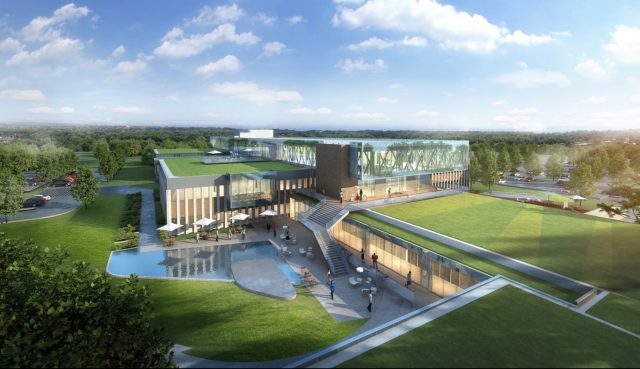 Blue Bell’s Arborcrest Corporate Campus, a sprawling property once solely occupied by Unisys, is up for sale and could trade for more than an estimated $200 million, writes Natalie Kostelni of the Philadelphia Business Journal.

Corporate Office Properties Trust owns the 137-acre property at Union Meeting Road and Penllyn Blue Bell Pike in Whitpain. The Columbia, Md., real estate investment trust has spent the last eight years involved in a major redevelopment of the site, plowing nearly $100 million into repositioning it and creating a campus for multiple tenants.

COPT believes with the bulk of the redevelopment completed and the buildings fully leased long term that the time is ripe to sell.

“We’ve created a premier project and significant value for our shareholders with that redevelopment,” Stephanie Kelly, a spokeswoman at COPT, told Kostelni. “We are immensely proud of that.”

According to Kostelni, the company focuses on tenants involved or affiliated with government agencies as well as defense contractors involved with defense information technology and national security related activities. A property in Blue Bell leased to private firms veers from that niche.

Kelly declined to say how much the property might sell for. Sources familiar with the complex, peg it at trading for between $150 million to $200 million.

COPT has owned the property since 1997 when it entered into a sale-lease back transaction with Unisys. For decades, Unisys occupied about 960,000 square feet at the property.

Click here to read the PBJ report in its entirety.