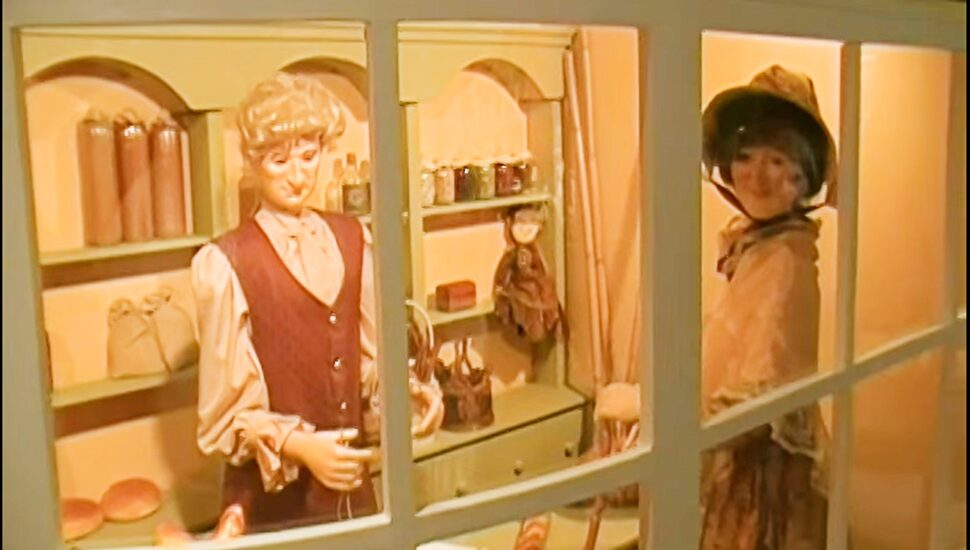 Image via Ed AC3IK Sweeney at YouTube.
A merchant and customer engage in a holiday transaction at the Enchanted Colonial Village, a vintage display from the former Lit Bros. department store in Phila.

A simply animated Christmas display from Lit Bros. department store in Phila. — the Enchanted Colonial Village — continues to draw baby boomers to its present home at the American Treasure Tour in Oaks.

The walk-through once attraction drew hundreds of thousands of families to Lit Bros., as reported in a 2019 Philadelphia Inquirer story by Gary Thompson.

The village originally began in the early 1960s, when the Lit Bros. — local retailers Samuel and Jacob Lit — decided to invest $1 million in a Christmas display to compete with the glitzy holiday décor of competing retailers on Market Street.

In-house designer Thomas Comerford worked with a German company to create a block-long installation styled as a colonial hamlet.

The displayed featured mini buildings including a blacksmith, baker, matchmaker, and toy maker. There was also a family gathered for a feast and many animated figures.

The installation was a great success from the very start and proved to have legs. It brought an estimated 500,000–700,000 charmed adults and wide-eyed children to the department store annually.

The department store closed in 1977, but interest in the exhibit remained.

The display changed hosts several times in the ensuing years, from the Philadelphia History Museum to Longwood Gardens to the Please Touch Museum before landing at the American Treasure Tour in Oaks.

Modern visitors may find it primitive and dated, but for locals of a certain age, it was then and still is now magical.

It reflects what is now known as animatronics, an technological entertainment breakthrough pioneered by the Walt Disney Company.

The New York World’s fair had several popular attractions highlighting audio-animatronics; however, it didn’t open until 1964.

Further, Walt Disney World and its lifelike moving figures didn’t arrive permanently in the East until 1971, making the Lit Bros. Enchanted Village a unique local experience for its time.

Read more about the Lit Bros. holiday village at The Philadelphia Inquirer.

This video, shot by a visitor to the Please Touch Museum, shows the Enchanted Colonial Village as it was displayed there.

As a Cure for Quarantine-itis, Montco Residents Cheer, ‘We’re Going to Disney World!’ (Or at Least Florida)