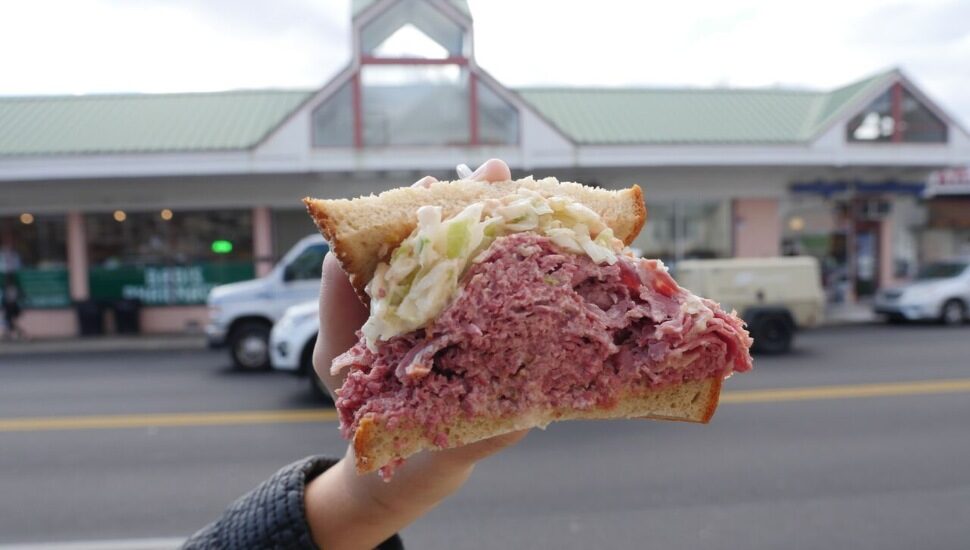 Hymie’s Deli, Merion Station, is in the spotlight for its top-notch Reuben. Mashed.com’s Trevor Carlson calls it one of “the absolute best Reuben sandwiches in the U.S.”

The classic melt-in-your-mouth sandwich has been an American deli staple for decades.

But its backstory is a bit muddled, reports Carlson.

Some historians cite a hungry actor who, in 1914, wandered into Reuben’s Restaurant on E. 58th Street in New York, seeking something substantial. Taking bits of what was at hand — ham, turkey, Swiss cheese, coleslaw, Russian dressing, and rye — proprietor Arnold Reuben produced a result that was declared delicious.

A different tale of its legacy centers around a poker player, Reuben Kulafofsky, who gambled frequently at an Omaha hotel.

One night, to fortify his stamina, he requested a grilled sandwich of corned beef, drained sauerkraut, and Russian dressing next to his chips — the poker ones, although it’s possible the potato variety were served as well.

The platter became a mainstay.

Regardless of its lore, the Montgomery County version has been satisfying the community for over 60 years.

Patrons at Hymie’s Deli can choose from more than one kind of Reuben: In terms of meat, three varieties are on the menu: classic corned beef, pastrami, and turkey. If guests can’t decide on which mouthwatering foundation to select, they can order “the best of both worlds,” which has both pastrami and corned beef.

More adventurous folks can get their Reubens on a tortilla or a latke.

Read more about Hymie’s Deli and its sandwich claim to fame at Mashed.com.