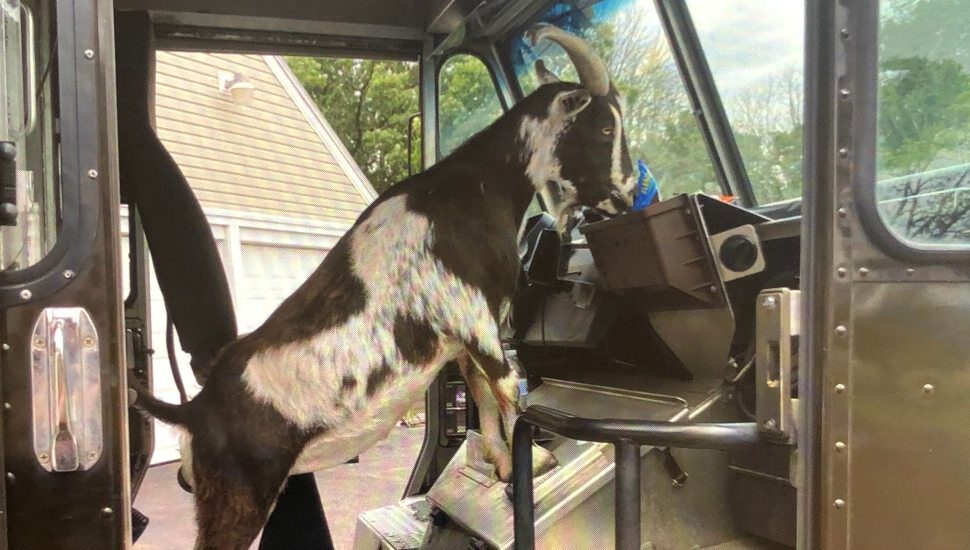 Image via Chuck Gazillo.
Retiring UPS driver Chuck Gazillo once had his driver's seat temporarily usurped by a hungry goat.

When Chuck Gazillo parks his brown UPS delivery truck for the last time on Nov. 18, it will be the end of a 32-year career of Pottstown service.

Gazillo has logged more than eight million miles on the road, the equivalent of 34 round trips to the moon.

For the long-term dedication to his duty, plus the connections he’s made with residents, he could well be called the GOAT (the greatest of all time) of Montgomery County delivery-service providers.

The title fits in more ways than one.

In recalling one memorable stop (among thousands), Gazillo said, “I was delivering to a house, and I came out, and there was a goat inside my truck!

“He was eating my lunch. And I’m thinking, How am I going to get rid of this goat?

“So I snuck into the back and grabbed some Chex Mix I was eating. I threw it all over the driveway [of the home receiving a package] to get the goat out.”

Over the years, Gazillo has shared his cab with other animals.

But at least those were contained.

“I delivered to Petco,” he said. “I carried snakes, fish, bearded dragons … .”

As a self-described people person, Gazillo has connected deeply with Pottstown residents over the years.

“I like the elderly,” he related. “I love to help out the elderly. If I have a senior citizen customer whose garbage cans are out, I’ll take them in.”

Transitioning away from UPS will allow Gazillo to spend more time with his two grandchildren. He’ll also delve deeper into his pastimes of fishing and golfing. And become a more frequent visitor to the Virginia beaches he favors.

He departs, however, with a good feeling about his long-term employer.

Of UPS, Chuck Gazillo summarized, “It’s a great place. They take care of you.

“If I had to do it again, I don’t think I would change what I did.”

UPS Wants to Build Warehouse Near Lower Moreland; Residents Are Not Too Happy