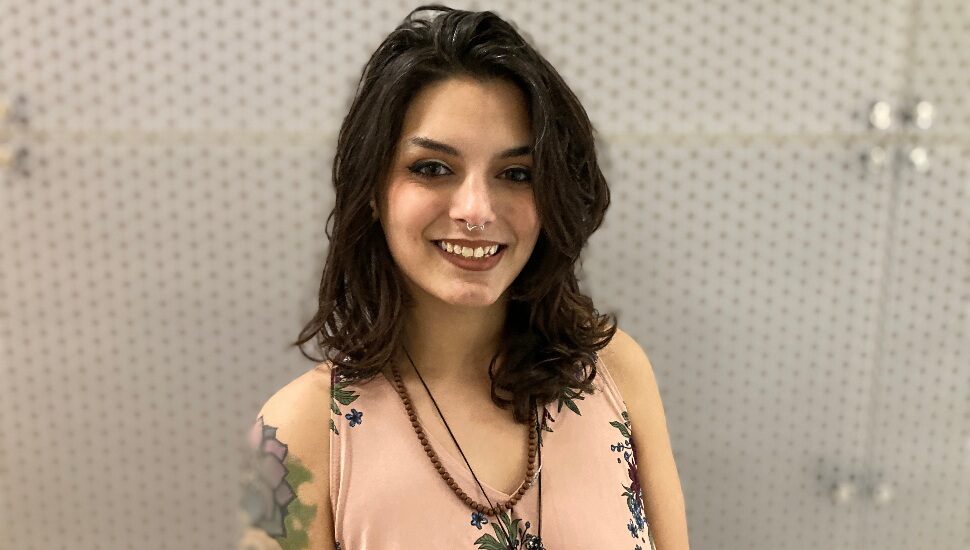 Image via Eric Devlin.
Liberal Studies student Cheyenne Diehl, who plans to become a Hawaiian/Pacific Islander anthropologist, has been named to the 2021-2022 All-Pennsylvania Academic Team.

Cheyenne Diehl’s decision to go back to school and pursue a career in Hawaiian anthropology is the result of several deeply personal events that shaped her life. It’s also a decision that has already changed her life for the better as its started her on a genealogical path to discover the lost history of who she is and where she comes from.

Today all of the hard work she’s done since stepping back into the classroom is being recognized on a statewide level.

Diehl, 28, a liberal studies major at Montgomery County Community College, has been selected for the 2020-2021 All-Pennsylvania Academic Team, which is sponsored by Phi Theta Kappa (PTK), the international honor society for two-year colleges, and the Pennsylvania Commission for Community Colleges.

This recognition honors an exceptional group of community college students who have achieved academic excellence and demonstrated a commitment to their colleges and communities. To qualify, students must have completed at least 36 credits and have a cumulative GPA of 3.5 or higher.

“It was nice to be recognized for that,” said Diehl, who is set to transfer to the University of Hawaiʻi at Mānoa this fall. “I was very excited. It definitely was nice to feel validation and recognition for the hard work you’ve put in over numerous years.”

Diehl comes from Hawaiian/ Pacific Islander ancestry but was adopted as an infant and raised by a single parent in York, Pa. Her family’s history is unknown to her, as is the culture of her people. After high school she moved to the small town of Gettysburg, Pa. and lived there for five years.

Six years ago, at 22 years old, Cheyenne Diehl found out she was pregnant with her son, Dante. In order to help support him, she decided to attend cosmetology school and become a hair stylist. Tragically though, in April 2016, at just two months old, Dante died unexpectedly of sudden infant death syndrome.

“Although he is no longer here with me, he is always and forever my inspiration and motivation in life because he showed me how valuable joy and happiness truly is,” said Diehl. “Though it was the hardest thing I have ever been through, it showed me how strong I am and the tenacity of my spirit. I will always be grateful for the time I had with him and will enjoy every second of my time here with a depth that I couldn’t understand six years ago.”

Still grieving her loss, Diehl tried to go back to work but quickly found it too difficult. In a tightly knit community, everyone knows each other’s business, making it hard for her to move on when customers would bring up the topic.

“Everybody knew who I was, knew I was pregnant,” she said. “It was difficult to navigate day-to-day life. I was a hair stylist serving customers who knew me. I needed a new start.”

Diehl moved to Conshohocken in 2017 and found a job as a hair stylist, where she works currently. As time went by, she began to yearn for something more out of life.

“After two years, cutting hair is not fulfilling,” she said. “It’s not stimulating for my brain. I’m not learning. I love to learn.”

Recognizing Diehl’s thirst for knowledge, a close friend suggested she consider community college as a way to explore her passions and engage in something more intellectually stimulating.

“They said ‘It doesn’t have to be crazy. Just try it for a year,’” said Cheyenne Diehl. “‘Maybe go for an associate’s degree. Give it a shot. You’ll be impressed by how much you’ll enjoy it. What do you have to lose? You don’t like what you’re doing now.’ And boy was I thankful for that friend.”

Diehl started her college career at MCCC in the fall of 2019. She quickly realized that not only did she love going to school and the variety of courses she was taking, but she also found the formal academic setting fit with how she learns best. She also appreciated the way she could schedule her courses to balance working full time.

After her first year at MCCC, Diehl, who is a Point Foundation scholarship recipient, fell in love with anthropology and began to seriously consider it as a potential career option. It would allow her to engage her passion for studying culture and the lives of people.

Diehl said O’Brien brought an infectious enthusiasm to a topic she was already curious about and was the first person she knew who actually worked in the field.

“She made a subject that was already very engaging even more interesting,” she said.

Often as Diehl thought heavily about becoming an anthropologist herself, she would ask O’Brien questions about her potential future.

“I’d ask her things like if you’re away six to nine months of the year at a time, how does that affect your family?” said Diehl. “I’d really try to get a one-on-one idea of what life could look like. I’m thankful I had someone like Dr. O’Brien.”

“I am well acquainted with Cheyenne; not only was she an excellent student in all of my classes, but she would often come to speak to me about her career choices and aspirations,” said O’Brien.  “I am happy that she has found her passion and is doing so in her classes.  I look forward to one day calling her a colleague, and I think her choice of studying Anthropology and Hawaiian Culture at the University of Hawaiʻi at Mānoa is a perfect fit for her.  I wish her the best of luck in her further education and future research.”

Diehl soon realized anthropology would allow her to learn more about herself and her heritage.

“I always struggled with understanding who I wanted to be in the future and what I wanted to do,” she said. “I am motivated by a pursuit of knowledge of all kinds and a desire to help those in ways that haven’t been done. I have seen so little in the world and aim to see more, expand my knowledge and give others an audience for their personal story.”

At first, she looked into the study of classical archeology in Italy or Greece, but realized, among other things, the field was incredibly competitive and would require three years of Latin at minimum.

“A lightbulb went on in my head,” Cheyenne Diehl said. “I realized I can learn about my family culture and do anthropology at the same time. There are fewer anthropologists dedicated to Polynesia than in Rome or Greece. It’s a needs-based type of thing. There is more of a need for Pacific archeologists and anthropologists.” So, she switched gears and hasn’t looked back.

It hasn’t always been easy for Diehl. She went back to school just a few months prior to the start of the pandemic. Like many students, transitioning to online learning in order to continue her degree program required flexibility, and more than a smidgeon of patience.

“But I made it happen,” she said. She’ll graduate this spring before relocating to Hawaii to continue her studies in June.

Plans for the future

After she completes her bachelor’s degree, Cheyenne Diehl said she plans to further her education and hopes to ultimately earn a doctorate in anthropology, so she can teach classes on the subject. People have often questioned why she has chosen this career path, saying it doesn’t seem to be worth the tremendous cost. Diehl said has never been one to follow the crowd when choosing what to do with her life and this calling is deeply personal to her.

“I have never been the type to try to fit myself into a box and would much rather carve a unique path in the world. I envision my career as a series of anthropological studies of different elements of Hawaiian culture, past and present, and contributing to the revival of Hawaiian traditions in language, art, dance, literature, and more to be discovered,” she said. “I would like to study the archaeological record of Hawaii, recent and far past. The difference between islands like O’ahu, which has been heavily developed, and Ni’ihau, an island that is not heavily developed and absent of non-Hawaiian citizens.”

“Although Hawaii is my passion, I also want to travel the world and soak up the diversity and beauty of the world,” she continued. “As an adoptee, this is also a pursuit of knowledge of my own culture that I wasn’t raised in growing up in Pennsylvania. I want to gain this knowledge for professional gain and also so I can pass knowledge of Hawaii through future generations of my family.”

She would also like to eventually open a nonprofit focused on educating the public about the culture of the Pacific Islander people. Not just in Hawaii but extending beyond the islands all the way back to the West Coast.

“I have so many ideas it’s hard to articulate them,” Cheyenne Diehl said, laughing.

With all that in mind, once she makes the move to Hawaii, she said she wants to keep using a skill that has served her well this whole time, as a way to say thank you for welcoming her and helping her discover her roots and as a tribute to her little boy.

“I hope to keep giving haircuts to people,” she said.

For Owners of Small Businesses, Remote Work Policies are Not One Size Fits All

Career Corner: 2021’s Biggest Job Trends that Will Continue into the New Year