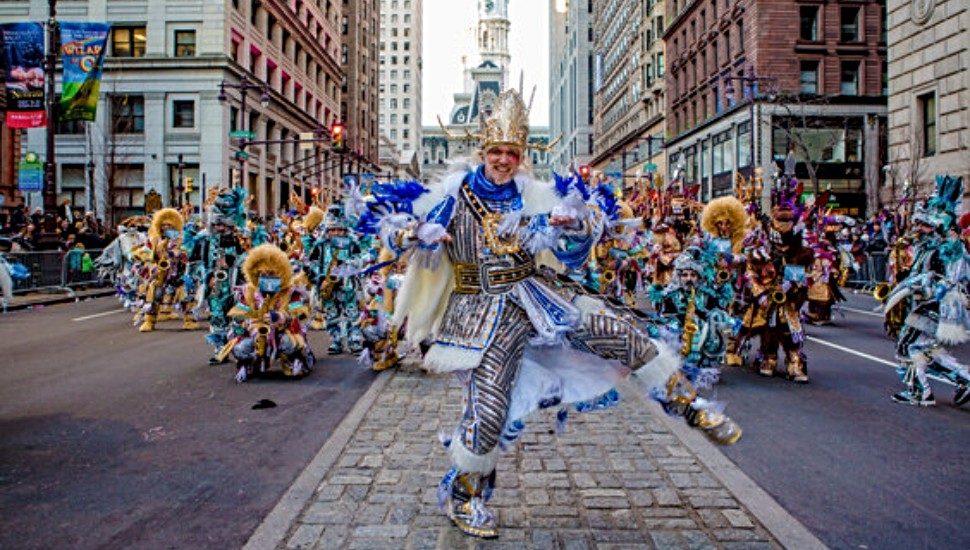 Welcome the new year with an old favorite!

On January 2, 2022, (postponed due to forecast of rain) Philadelphia’s longest-running signature event is back, with the Mummers Parade returning to South Broad Street. Beginning at 9 a.m., more than 10,000 paraders will ‘strut’ along the route from City Hall down Broad Street to Washington Avenue, entertaining spectators in-person, on television, and through a live stream.

The Mummers Parade, which began in 1901, is the country’s oldest continuous folk parade.

The parade includes five divisions (Fancy, Wench, Comic, String Band, and Fancy Brigade) bound together by shared values and a legacy from generations of families who have participated throughout the years.

Visitors who would like to view live performances will have multiple stops to choose from along the parade route.

The order of the show will be as follows: Fancy, Wenches, Comics, and String Bands. Designated viewing areas are as follows:

The official broadcast partner of the Mummers Parade, PHL17, will begin coverage at 8 a.m. ET, on television and streaming live online. The station will have wall-to-wall coverage, with personalities embedded along the route.

Footage of highlights from the 2020 Philadelphia Mummers Parade on Jan. 1, 2020, on Broad Street in Philadelphia. It’s a tradition on New Year’s Day in the City of Brotherly Love. Video by Julia Hatmaker/PennLive.

The Mummers and the City of Philadelphia want all spectators to enjoy this year’s parade. All attendees and parade participants are asked to follow city and CDC guidelines regarding mask requirements.

Please visit the Independence Visitor Center website for more background on the history of the Philadelphia Mummers.

Celebrate the Holidays at Tinseltown Holiday Spectacular in Oaks