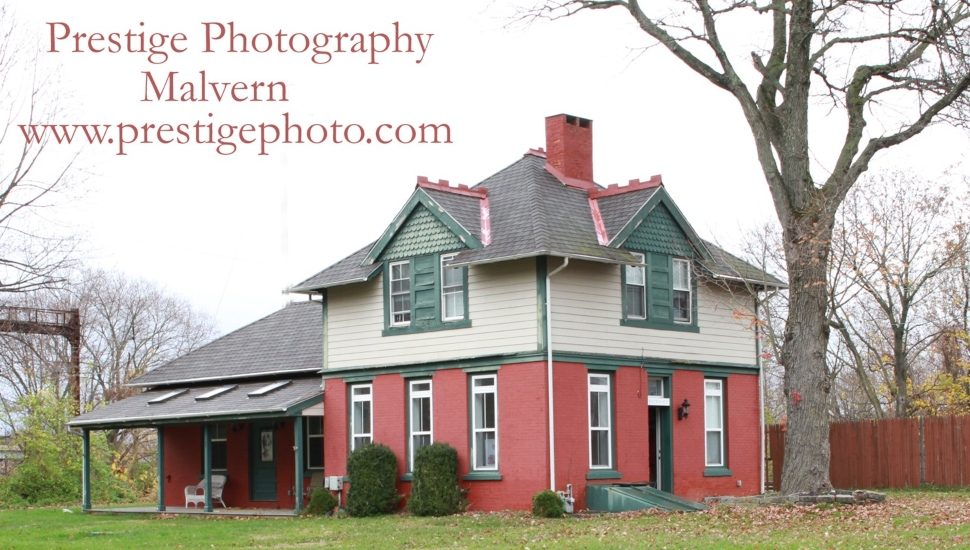 Malvern Bank client Dan Hall, owner of Prestige Photography in Malvern, has been a professional photographer since 1991. A graduate of Conestoga High School, his earliest work was at rock concerts in the mid-Atlantic region.

A rock music fan, Dan was very happy to not only hear some of his favorite music – groups including The Rolling Stones, ZZ Top, Billy Joel, The Grateful Dead, and Crosby, Stills, and Nash – but to photograph them from the best seats in the house, in “the pit” in front of the first-row crowd barrier.

Dan opened his first studio in Berwyn in 1991. In 2004, he expanded his business when he bought what was once the Glen Loch train station off Phoenixville Pike near The Home Depot.

Built in 1876, the station used to be part of the local commuter line to Philadelphia. Dan’s studio is a 2,400-square-foot space with a furnished sales and reception area, a changing room, and hair and makeup area.

To hear Dan tell it, his photography skills, while important, aren’t the only key to his success. “I do everything I can to make the client as comfortable as I can, because I think that a photo subject that is comfortable and at ease will produce photos he or she will like.”

For Dan, making a client comfortable includes finding out about their interests, likes, and dislikes during a pre-shoot interview.

For example, Dan approaches high school senior portraits differently than most photographers. “I like to talk to the student by phone to learn about their interests; what makes them tick. Then, I’ll plan their studio or offsite session around the things that they love; what’s important to them; what they like to do; and in an outfit that matches the environment.

“One high school senior’s father was a SAAB repairman, and the son had already started his own collection of SAABs that he was renovating. In his senior portrait, I photographed him with six of his cars from a 10-foot ladder using a wide-angle lens.

“In another senior photograph, the student was an accomplished saxophonist. So, I photographed her in a long red dress playing her saxophone in a shady/moody lighting – like she was on stage.

“These photos are important to high school seniors. They pass them around to their friends, many of whom they will not see again for months or years; maybe they’ll never see them again. So, students see their senior pictures as the best way they can be remembered the way they want.

“The way I shoot high school senior photos takes longer – about an hour to an hour-and-a-half per student. Most other school photographers can do hundreds of students a day. Doing portraits my way enables me to get to know the student better, and I think that’s reflected in the quality of the photo.”

Personalization is an important part of the way Dan does business. Each client is different and has a unique story to tell. And Dan seeks to help each client tell his or her story through his photography.

Malvern Bank gets that. Since 1887, we have strived to become engaged with our communities. Personalized service is in our DNA. Like Dan, we listen to our clients’ unique stories and then build tailored responses to their needs through face-to-face, high-touch service.

I asked Dan a few questions about his business.

Mark Cohen: You’ve done a lot of different kinds of photography (e.g., schools, weddings, corporate, commercial, modeling, families) since your early days shooting rock concerts. How has your photography “mix” changed – and why?

Dan Hall: I’m doing more corporate – or to be precise, more “executive” photography – now. During the pandemic, as a lot of people lost their jobs and were looking for new employment from home, they found that they needed an executive photograph to submit to potential employers with their resumes. People such as Realtors and those in financial businesses also use executive photos to advertise themselves on their websites.

Today’s technology has made it a lot easier to “be a photographer.” Of course, everybody has a camera phone, and many people think they can take professional-quality photos with their phones. But they can’t. I use 40- to 60-megapixel cameras, so the quality of the photographs I take and my ability to edit them is far improved over the capability of commercial cameras of 10 or more years ago – and certainly better than today’s cell phone cameras.

MC: What do you like most about being a photographer?

DH: I like making something from nothing. When clients come into my studio, they have nothing. In the studio, I make clients perform for the camera, and through my creativity, they leave the studio with some artistic. And I know they’re happy with the result, because I ask them if they’re satisfied with the work I’ve done.

I’ve never had to do a retake. Since I’ve talked to the client before the shoot about their expectations, I know what they’re looking for beforehand.

Nobody is fond of having their picture taken, so I try to make them as comfortable as possible. During the pre-shoot interview, I ask the client what kind of music they like to listen to. Then, during the shoot, I’ll play that music on Pandora. I find that helps create the best atmosphere possible.

MC: You’ve been in the photography business for 30 years. What is the most significant change that has occurred in the craft of photography during your career?

DH: Digital photography has changed the way I do my work. Now, when I shoot an event or executive photo, the photos are stored on a memory card, so I can view the shots on my camera and give the client a good idea of the end result. I still bring them back to the studio where there are no distractions to review the final photos.

And, as I mentioned before, everyone has a camera phone, so there is a lot more amateur competition out there for professional photographers like me.

MC: What challenges has the pandemic created for you and your business?

DH: When you are a photographer, your business is kind of “close contact,” so the pandemic definitely “put a hurtin’” on my business. Obviously, I haven’t done a lot of group photos in the past year. My recent business has been more about individuals coming to my studio for photos of themselves.

I’ve also begun teaching classes to teach individuals how to be a photographer. People who have bought an expensive camera often don’t know how to use them, so I bring them into my studio, one-on-one, and teach them about their camera, lighting, staging, etc.

The pandemic just about cut my business in half. But it’s starting to come back.

The Inaugural Class of MONTCO Millennial Superstars: Part 2 of 4

Manor College Graduate Beats the Odds and Gets Her Degree, Thanks to the Personal Attention From Her Professors