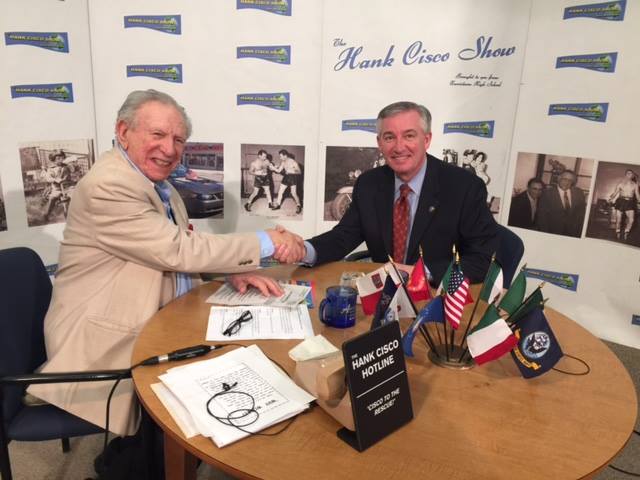 Hank Cisco with Montgomery County DA Kevin Steele on the set of his show, the Hank Cisco Show on NASDtv. Image via Hank Cisco Facebook page.

“He was a great man who grew and developed as a man throughout his life and contributed to the community with consistent passion and care,” reads a statement on Cisco’s official Facebook page.

Cisco was born Frank Ciaccio in 1923. He changed his name as a young boxer to be able to better market himself in fights.

During his years in boxing as a competitor and referee, he trained alongside the notorious Rocky Marciano, refereed an early Joe Frazier fight, and once kicked Muhammad Ali out of the ring.

After boxing, he had a long and respected career as a Norristown police officer and then as a decades -long producer of the Hank Cisco Show on NASDtv.

During this time, he was also named Norristown’s official ambassador to the world at a municipal council meeting, a role he held until January 2019.

Read more about Hank Cisco at the Patch by clicking here.