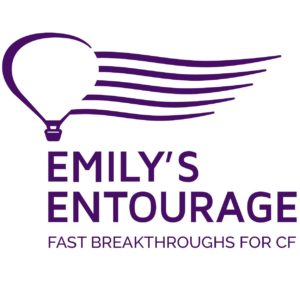 Emily Kramer-Golinkoff is on a mission to deliver hope and breakthroughs in research for curing all types of cystic fibrosis.

Cystic fibrosis is a chronic fatal disease that affects the lungs and digestive systems. For many years, it was a death sentence for the individuals who were diagnosed.

Since 2011, Emily’s Entourage has brought awareness through fundraising campaigns for research and experimental treatments. The Merion Station-based nonprofit’s contributions to cystic fibrosis research has even garnered national attention.

“Our goals are all about bringing fast breakthroughs to patients,” said Kramer-Golinkoff, 34, who graduated from Lower Merion High School.

Sadly, none of the breakthroughs are helping her and CF patients who fall under the “final 10 percent.” Kramer-Golinkoff has 31 percent lung function. She has an untreatable nonsense mutation where a certain group of cystic fibrosis mutations do not produce the full CFTR protein. People with this genetic defect have a smaller version of the CFTR protein produced.

She said that nonsense mutations can occur in other diseases like cancer, muscular dystrophy, and certain blood disorders. Overall, there are 12 percent of genetic diseases caused by nonsense mutations, which affects 30 million people. She is also in an advanced stage of cystic fibrosis.

Emily’s Entourage was started by herself, and her family and friends because there is an “urgent, unmet need” in the CF community.

She sees the work of Emily’s Entourage as a partnership with researchers and companies trying to find breakthroughs for patients safely and quickly in a global, coordinated approach.

“You don’t have to be a billionaire or rocket scientist to galvanize the community, make a difference, and build something that is really world-changing,” she said.

Emily’s Entourage was named after two of her close friends. Long before it became a foundation, it was the moniker for a fundraising team at a cystic fibrosis event. They wanted to resurrect the name of the team and turn it into a foundation and research organization.

The logo is a purple hot-air balloon; purple is the awareness color, while the hot air-balloon is a metaphor. Her family has always said that when there’s a cure for CF, they will gather their friends and family and ride hot-air balloons. The idea of a hot-air balloon represents the lungs and air, success, and transcendence of adversity.

“It feels like a privilege to me to be able to lead this effort and hopefully bring lifesaving breakthroughs to that final 10 percent who need these breakthroughs so bad,” Kramer-Golinkoff said.

“It’s a special initiative for us because it represents the Emily’s Entourage spirit,” Kramer-Golinkoff said.

The gala will feature a silent auction, speakers, and a tribute to Emily’s Entourage Champions, who are groups of professionals who have pledged to raise $1,500 within their professional networks. The person or group who raises the most money will be recognized as the Champion of the Year. She said that last year’s Champion raised nearly $40,000.

“People of all ages raise their hands and realize that they can play a critical role in helping us reach our goal,” Kramer-Golinkoff said.

She said they are in need of sponsors and auction items valued at more than $100. Through ticket sales and sponsorships, they hope to surpass last year’s fundraising total of $650,000.