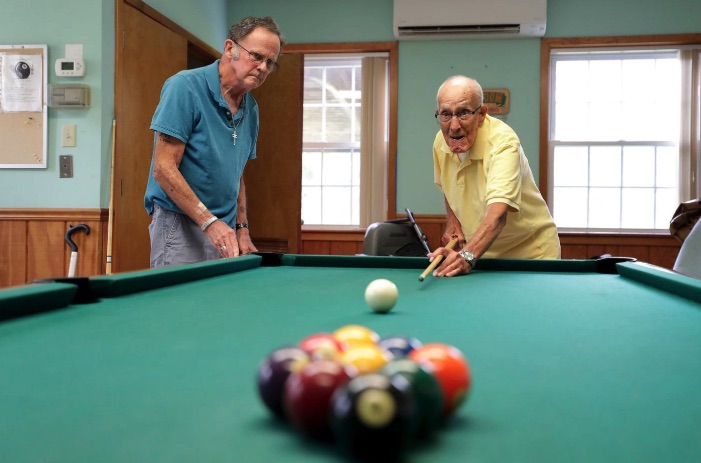 Fred Gomez (right), 104, takes aim at the pool table as Colin Hitchman, 75, watches at the Central Bucks Senior Center in Doylestown. Gomez plays pool there twice a week. (Image and caption via Inquirer.com)

After blowing out the candles on his birthday cake, Gomez moved to the billiard nook named after him when he turned 102. Hardly surprising since he has been playing pool twice a week in Doylestown for years.

Gomez had seen many things during his long life. He graduated from Central High School in Philadelphia during the Great Depression. Then in his early twenties, he worked on constructing the Hoover Dam near Las Vegas.

During World War II he joined the Navy and was assigned to a destroyer out of Pearl Harbor.

After the war, he got married and raised his son and daughter in Glenside with his wife, Mary.

Today, he lives with his son’s family in Maple Glen and keeps a rigorous schedule that also includes swimming several times a week.

But he feels there is no big secret to his long life.

Read more about Fred Gomez at The Philadelphia Inquirer by clicking here.