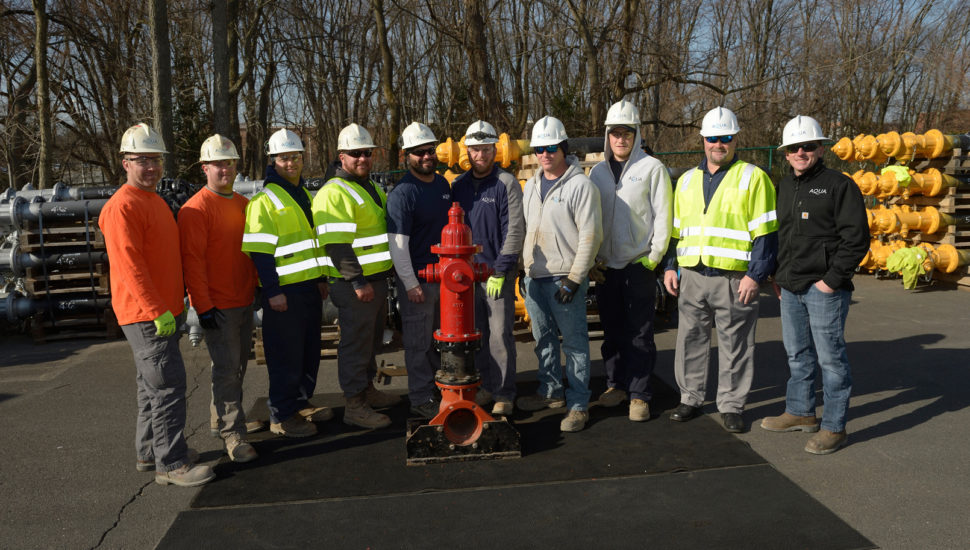 In total, seven of the eight men who competed for the win are from Montgomery County.

The pair beat out three competing two-man teams, also from Aqua’s Eastern Maintenance Operation, to represent Aqua in the state championship with a time of 2 minutes and 34 seconds.

The teams had just a few practice sessions in the two weeks leading up to the March 28 competition that took place in the yard at the Eastern Operations Center. Local news station 6abc was there to cover the event, in which a disassembled mock hydrant is put together by the two-man teams under the watchful eye of Field Supervisor John Christiansen who represented Aqua in the 2018 state championship.

“In addition to timing the competition, I inspect the hydrant when the team is finished to make sure all of the bolts are in place and tightened. If anything is missing or loose, the team gets seconds added to their time,” explained Christiansen.

Real hydrants are delivered fully assembled, so the only time that crews assemble them in the field, is when they have been damaged by a vehicle or begin leaking. Not all of them are salvageable.

Sciallis and Pollarine have not worked together for several years. Sciallis, who’s been with Aqua 13 years, said it was the first time that the two actually worked together on a hydrant. They practiced together about five times in the two weeks leading up to the competition. When asked what led to their win, Sciallis said, “I think part of it was tightening the bolts by hand before using the wrench.”

Pollerine, a 16-year Aqua veteran who was responsible for the bolts, said the mock hydrant isn’t exactly like those in the field. “The principles of assembly are the same, but the parts are a bit different. The revolving nut, the break-away flanges, the bolt patterns and whether they open to the right or left are different.”

Pollerine said, “I wasn’t going to participate in the competition initially, because I just had a bicep tendon surgically repaired last June, but Joe asked me to do it and now I’m glad I did. The bragging rights made it all worthwhile.”

Sciallis and Pollarine worked together early in their career, but not recently. Sciallis was also the winner of Aqua’s first two Backhoe Challenge competitions in 2016 and 2017. It was Pollarine who actually taught Sciallis how to operate the backhoe.

In total, seven of the eight men who competed for the win are from Montgomery County.

Aqua Pennsylvania serves approximately 1.4 million people in 32 counties throughout the Commonwealth of Pennsylvania. Visit AquaAmerica.com for more information or follow Aqua on Facebook at facebook.com/MyAquaAmerica and on Twitter at @MyAquaAmerica.