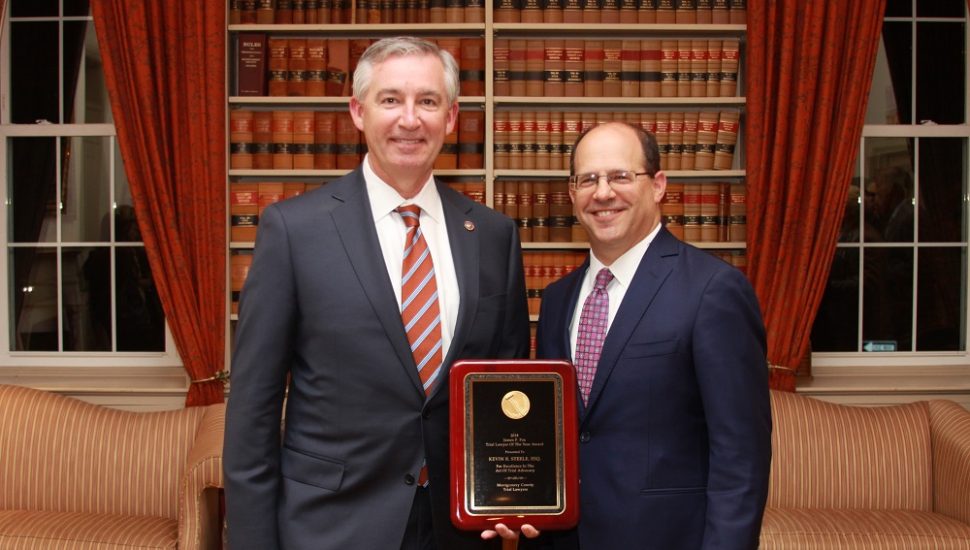 The Trial Lawyers Section of the Montgomery Bar Association (MBA) is pleased to announce that Montgomery County District Attorney Kevin R. Steele, Esq. is the recipient of the 2018 James P. Fox Trial Lawyer of the Year Award.

The James P. Fox award recognizes excellence both inside and outside the courtroom. District Attorney Steele has a well-deserved reputation as a stellar litigator and champion of justice and has been been serving the people of Montgomery County since joining the District Attorney’s Office in 1995.

Established in 1885 to professionalize the county’s practice of law, the Montgomery Bar Association (MBA) is one of our nation’s oldest and most respected bar associations, representing over 2,100 legal professionals in Montgomery County, Pennsylvania.

As the third largest Bar in Pennsylvania, the MBA has a longstanding tradition of service to its membership and the community.  For members, the MBA offers an important arena for networking, professional development and education.  For the community, the MBA serves as a trusted legal resource, offering education, legal assistance and funds, and resources for individuals and agencies in need.

HealthcareAfter Learning to Understand COVID-19 Better, ‘Shields Are Up and Activated’ at Suburban Community Hospital in NorristownFebruary 15, 2021

Food and DrinkDespite Many Curveballs Thrown By Pandemic, Montco Restaurants Have Risen To ChallengeFebruary 9, 2021