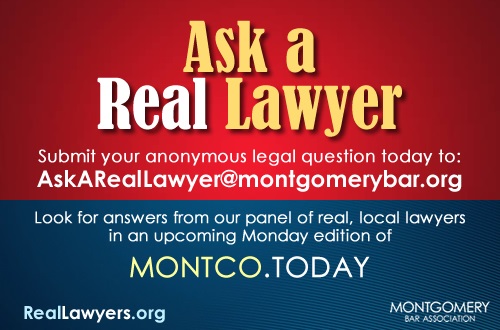 Submit your anonymous legal questions to AskaRealLawyer@montgomerybar.org. Look for answers from one of Montgomery Bar Association’s attorney panelists in Monday editions of MONTCO.Today.

Question: A forty-year-old friend of mine lived with his mother and seven-year-old daughter for the child’s entire life until his recent death.   He had legal custody of the child with the exception of the two weekends a month the child was with her mother; for a period of time, these visitations included required supervision due to drug convictions and a record of abuse of her oldest child.  Although the mother is currently clean and undergoing court-mandated drug monitoring, she has been in-and-out of rehab and prison for five of the child’s seven years, and has expressed little interest in being involved in her life. Through dubious means, the child’s mother obtained unsupervised custody the day after my friend’s funeral, is refusing to return the child to her grandmother, and has ignored all attempts at communication.  Although a custodian in-case-of-death was not established in the custody order, it would seem to be in the best interest of the child to remain with the grandmother rather than with a mother she has never known and who appears only interested in obtaining custody now for financial reasons.  Does the child’s grandmother have any recourse to obtain custody?

In short, yes. In all custody cases, the judge starts from the premise of what is in the best interest of the child. That is the goal of any child custody case.

In the past, grandparents were usually seen as the go-to substitute parents for their grandchildren, both in the legal and the social sense. They were allowed to request custody when the parents were separated for at least six months, and/or were in the process of a divorce. The grandparents were often granted that custody (whether it be partial or full) simply because of their status as grandparents. Even without having played a parental role in the child’s life, the title of “grandparent” was deemed important enough to designate someone as good parental figure.

The power and role of a grandparent in custodial situations has shifted at various points in time. For example, in Troxel v. Granville, 2000, the United States Supreme Court decided that no third party, including gra

ndparents, can overpower the joint-decision of the parents, as parents have the constitutional right to raise their children as they wish. And so, if both parents agree that the grandparents cannot or should not have a relationship with their child, the court has no power to overrule that decision. However, in the case of Hiller v. Fausey, 2006, a case very similar to yours, the Pennsylvania Supreme Court decided that the grandparent has the right to stand in place of his or her deceased child as a parent of the grandchild, especially if the grandparent(s) has a previous relationship with the child.

wishes are to be weighted heavily in custody cases. This case established a strong presumption in favor of parents that are in agreement over the wishes of grandparents. An example where this case was successfully argued involved an unmarried couple who for a time had lived with the grandmother and then agreed to allow the grandmother to care for the child for a short period of time after they had separated and both left Grandmother’s home. The child remained living with the Grandmother as primary care giver. When the father’s work and living situation stabilized he petitioned the Court for full custody. The mother and father lived separately. Even though the parents were not together as a couple they were making decisions in concert with each other regarding the care of the child. This was a critical factor in determ

Recent legislation incorporates different parts of these past custodial cases. In July of 2017, Senator Donald White from the 41st Senate District introduced a bill (23 Pa.C.S. 5325(2)) clarifying the custodial rights of third party individuals, including grandparents. The bill was signed by Governor Tom Wolf this past May and began to be applied on July 4th. It emphasizes the i

In this particular case, the grandmother had, for seven years, stood in loco parentis (meaning in place of a parent), while living with the child and her son, as the mother had been absent due to prison and rehab for most of the child’s life. As this situation applies all three prongs of the new child custody law, the grandmother has good standing to fight for custody of her grandchild and it is my opinion she will likely prevail under the facts presented in the question.

To arrange a discounted ($40) half-hour consultation with attorney David Kennedy Bifulco, Esq., click here to email a Montgomery Bar Association LRS advisor (LRS@montgomerybar.org), or call 610-994-3656 during regular business hours (Monday-Friday, 9 AM-4PM). If contacting us by phone, please be sure to mention this attorney’s name and how you heard about us. Automated referrals to other Montgomery Bar Association member-attorneys in your area offering free or deeply discounted consultations through our service are available online anytime at RealLawyers.org.

Back to Ask a Real Lawyer

Oops! We could not locate your form.