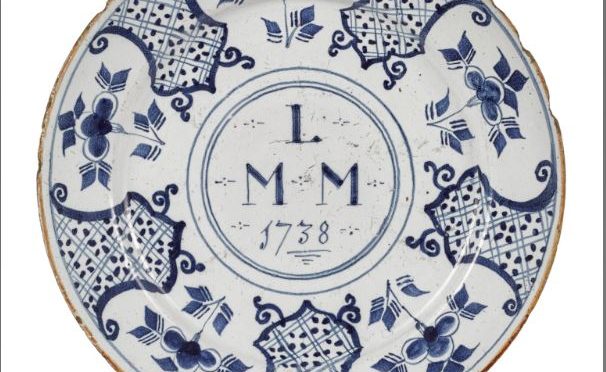 Downingtown’s Pook & Pook auction house has sold a rare Liverpool delft plate from 1738 that belonged to Michael and Mary Lightfoot for $29,280.

Downingtown’s Pook & Pook auction house has sold a rare Liverpool delft plate from 1738 for nearly $30,000, writes Norman Watson for The Courier, a newspaper in Dundee, Scotland.

The auction house, which is located in a historic stone inn built in 1761, recently held an international sale that offered 500 lots from several states, including Pennsylvania.

The highlight of the British section of the sale was the plate initialed “MML” for Michael and Mary Lightfoot. They were members of a Quaker family that lived in Chester County in the 18th century.

The plate is categorized as Liverpool delft, which is the tin-glazed earthenware created between 1710 and 1760 in Liverpool. It was most likely brought here by Quaker potters who worked in Liverpool before trekking to the new land. The fact that the plate managed to survive the long and difficult journey is incredible in itself.

The rare plate is part of the small number of recorded tableware that was made for Quaker families.

Read more about the plate in The Courier here.

Before Salem, There Was the Delco Witch Trial