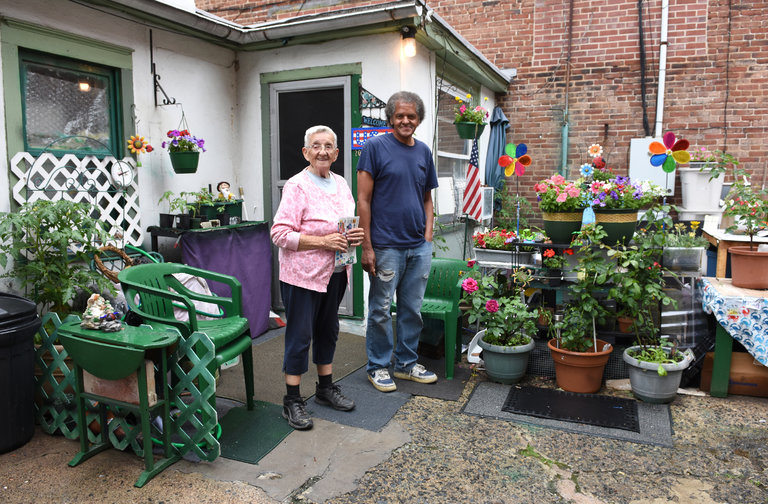 Helene Poster and her neighbor Jay Gilbert in Pottstown both say they are planning to vote for Donald Trump. Photo courtesy of Sabina Louise Pierce, New York Times.

It seems that Donald Trump has cast a long shadow over the Pottstown community, writes Thomas B. Edsall for the New York Times.

Pottstown, whose retired and laid-off workers have deep roots in the Democratic Party, is exactly the kind of place where Trump hopes his “Make America Great Again” plan will resonate with voters and get them to choose the Republican option.

Once an industrial zone where steel mills, furnaces, textile plants, and many other factories provided secure jobs for the working and middle class, Pottstown has undergone a rapid deindustrialization since the 1970s. The number of jobs in Pottstown has dropped from 12,287 in 1950 to 9,434 today, while the population remains steady at just over 22,000.

“I like him because he is to the point, and it’s time for a change. I think he’s got the oomph to rattle some cages,” said John Keyser, a nonunion employee at Universal Concrete Products Corporation.

In a lot of cases, Trump garnered white male support due to their animosity toward Hillary Clinton, rather than their faith in Trump.

“Donald Trump is a misogynist, and I don’t like misogynists,” said Stacey Weinstein, a 53-year-old psychiatric social worker.

Read more about the Trump Effect in the New York Times by clicking here.