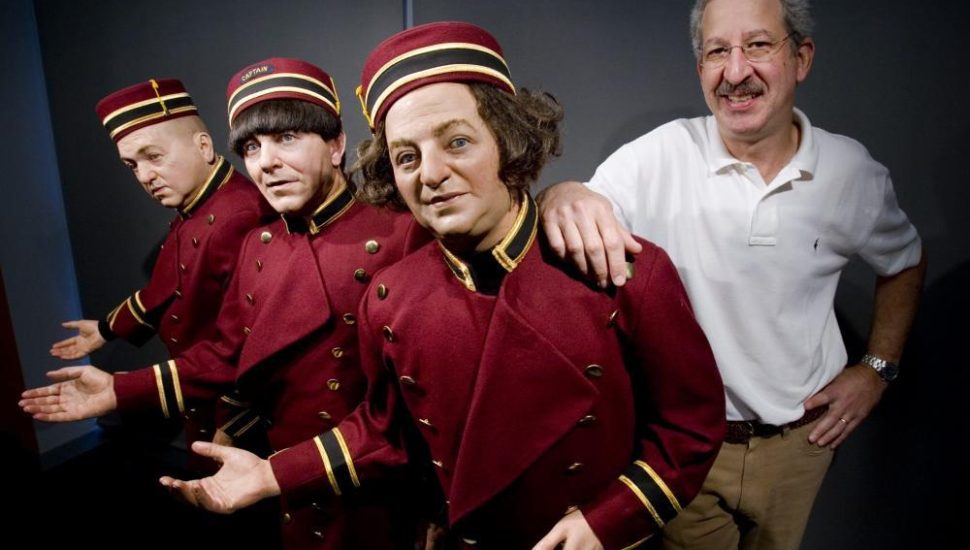 Photo of The Stoogeum curator Gary Lassin courtesy of the Southeast Missourian.

Ambler’s Three Stooges Museum, a shrine to the lovable numbskulls who were the heroes of 190 movie shorts from the 1930s to the 1950s, was recently featured in a Toronto Sun article by Mitchell Smyth.

The Stoogeum, a name derived from stooge and museum, is owned, managed, curated, and publicized by Gary Lassin.

Upon entering the Stoogeum, guests are greeted by life-size waxworks of Curly, Larry, and Moe dressed as bellhops. The exhibits include posters, costumes, original props, scripts, foyer stills, and much more.

They all record the life and work of the men who delighted generations of boys of all ages in cinemas around the world. (DVD box sets of The Three Stooges sell well in the 21st century.)

Lassin’s wife got him started on creating this memorial to the goofballs who punched, slapped, bit, gouged, kicked, and choked each other, while (as Curly might say) “moidering da King’s English.”

“When I met Robin, the girl who would become my wife, I asked about her family,” said Lassin, 61. “She evaded the question and I thought, ‘Is there a serial killer in the family?’ Finally, she told me that her ‘Uncle Larry’ – actually her great uncle – was Larry Fine of The Three Stooges, and she’d always been afraid of him ‘because he was always hurting people, or getting hurt.’”

According to Smyth, Larry’s brother was Robin’s grandfather, Morris Feinberg, and he had a lot of Stooges memorabilia. He later gave it to Lassin, and it became the nucleus of his collection, which grew as he scoured auction houses, collectible stores, and junk shops. When his collection outgrew his home and his garage in 2004, he opened the Stoogeum.

Click here to read more about the The Stoogeum in the Toronto Sun.

Wall Street Journal: Local Couple Transitions from Living Off the Land to Traversing It in an RV